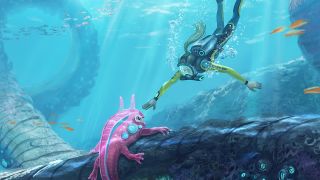 Subnautica blends story, exploration, resource gathering and blood-chilling scares in a way few other survival games manage. Its ocean world, full of tentacled monsters, feels endless, but it always makes it clear what you should be doing next, providing it a structure that makes it easy to set your own goals. That blend, and its level of polish, makes it feels almost unique in the genre – but that doesn’t mean there aren’t plenty of excellent games like Subnautica, ready to draw you in with their own sense of wonder.

Its underwater landscapes, its gradual sense of progression, its cryptic story, the tension of knowing a powerful, tentacled monster is lurking just out of sight: you’ll find bits and pieces of it arranged in other games, and in this list we’ll run through the ones worth playing. Here are the 10 best games like Subnautica.

It may not have the storytelling prowess of Subnautica, but The Long Dark, which asks you to survive in the deadly Canadian wilderness, is every bit as atmospheric. That’s thanks in no small part to its hand-painted art style and gorgeous weather, which can turn in an instant and leave you freezing to death without enough wood to make a fire, as wolves howl ominously in the distance.

Its story mode – three out of five episodes have been released so far – serves as a solid introduction without holding your hand too hard, but it’s in sandbox mode where The Long Dark shines. You create your own stories as you trudge through forests and into caves, all the while keeping up a regular supply of food and fuel. It can be brutal, and you’ll find yourself in plenty of hairy spots where food and daylight are in short supply, but moments of panic are spread between stretches of pensive silence. It’s just you, the snow, and your footsteps. And those wolves, of course.

Available on: PS4, Xbox One, Switch and PC

If it’s stunning ocean vistas you want, then dive into Abzu, an underwater exploration game with a soundtrack from Austin Wintory, of PlayStation classic Journey fame. As the music flows over and around you, you’ll discover new, glorious views, from huge schools of colourful fish to mysterious underwater temples etched with ancient carvings. It’s almost completely free of threat, and there’s none of the challenge or fear you’ll find in Subnautica – but there’s still plenty to love, and both the sights and sounds of its watery world never fail to surprise.

Available on: PC, PS4, Xbox One

Less structured and more expansive than Subnautica, No Man’s Sky gives you a whole galaxy to explore without restraint. You zoom from planet to planet, busting through atmospheres and watching land slowly rise to meet you, moving fluidly between outer space and solid ground, space station and rocky outpost. It has a story, and objectives will nudge you in a particular direction, but you’ll get the most out of it when you’re guided by your own whims. Some planets offer few resources or signs of life – others feel like you could live on them for decades. After a unstable launch, Hello Games has revamped the entire game over a period of years, and the latest big update, Beyond, adds improved multiplayer support and an excellent VR mode on PC and PS4.

Available on: PC, PS4, Xbox One, Switch, iOS, and Android

What started as an obscure indie experiment with a small, dedicated following has blossomed into one of the biggest games in history. If you liked the crafting and survival elements of Subnautica, along with its variety of biomes, Minecraft has you covered: its freeform block-breaking and building means you can create practically any structure imaginable, and cranking the difficulty up will make every hiss of an explosive creeper sound like a death rattle.

It doesn’t have a story in the same way Subnautica does, so you should only try it out if you’re happy to make your own fun. But if you ever felt constrained in your submarine, or wanted more freedom to build a base to your exacting specifications, Minecraft will feel like a revelation. All versions of the game (other than PS4) now work together, whether you’re playing on PC or mobile, so you can play with your friends on different platforms.

The logical next step from Subnautica is... more Subnautica, and that’s exactly what Below Zero offers. Currently in Early Access, it’s a standalone expansion that’s nowhere near as big as the main game, but can still give you hours of underwater fun. The water in Below Zero, as the name suggests, is far chillier: set in the arctic region of an alien planet, it’s your job to survive after a disaster on board a research station orbiting overhead. Expect the same gameplay loops you know and love in Subnautica, but with new biomes, creatures and tools, and regular updates keep improving it.

Starbound looks nothing like Subnautica, but the depths of its crafting systems, and the huge variety of planets to explore, make it a must-play for fans of survival sandboxes. It’s essentially a sci-fi Terraria with a bigger emphasis on story: as you hop between planets you’ll gather resources to gradually upgrade your gear, progressing from swords to machine guns, walking boots to jetpacks and teleportation devices.

Its planets each offer distinct biomes, procedurally-generated for maximum variation: one minute you’ll be creeping through a thick forest, the next flying over a pool of magma. A streamlined story, complete with scripted bosses, genuinely interesting characters and tons of lore, keep you pushing on to the next world.

Firewatch, in almost complete contrast to Subnautica, is an on-rails story game that almost never puts you in real danger: and yet it’s one Subnautica fans should check out. Wonderful environmental storytelling mean that although exploration is minimal, you’ll want to open every drawer and read every note you find. What it shares in common with Subnautica is both a gorgeous world and a heavy sense of atmosphere: when you’re playing Firewatch you’re almost totally lost in the world. It feels like the end point of the “waling sim” genre: polished, beautiful, and lives long in the memory.

Available on: Xbox One, PS4, PC

A bit like No Man’s Sky-lite, Astroneer is a cutesy exploration game with a surprising amount of depth, especially when it comes to base building. As you move between its seven planets you’ll gather resources from the environment and explore high and low, scaling mountains and digging into caves for new materials. Then, when your inventory is full, you’ll come back and craft those materials into useful tools, looping together science labs, generators, solar panels and oxygen tanks in whichever configuration you want. The result is a relaxing space adventure with a gradual sense of progression, and it’s especially fun if you can rope in a friend for the ride.

An open-water survival game in which you (plus a friend, ideally) hook floating resources to your raft as they bob by, build ramps to board islands you spot on the horizon and, occasionally, venture into the depths to grab valuable goodies. A patrolling shark keeps you honest and, like Subnautica, progression means crafting better gear, and bigger oxygen tanks. All the while, you expand your raft from a simple four-by-four grid to a complex, multi-leveled floating base. It’s nowhere near as polished as Subnautica – it’s still in Early Access, so expect some bugs – but it’s one of the few ocean-based survival games that’s worth playing.

Subnautica’s sea monsters make it feel like a horror game: The Forest gives you that same sense of dread, only it swaps the ocean willies for a pack of hungry cannibal mutants who want to munch on your flesh. As the lone survivor of a plane crash, you must stay alive in an oppressive forest, chopping down trees to make wood and scavenging whatever food you can, crafting increasingly sophisticated gear as you go. The presence of the mutants provides a constant tension, and you’ll always be looking over your shoulder. Flexible building tools let you build your base exactly as you want, and a trail of clues provides a framework for exploring its dense world.