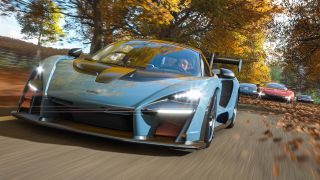 At the E3 2018 presentation for Forza Horizon 4 the focus wasn't on the sleek lines of the sports cars, the rumbling sounds of engines or anything that would elicit a coital grunt of pleasure from Jeremy Clarkson. It was in fact a small, thatched cottage set in a rural landscape, complete with rose bushes, a bright red post box and sheep gambolling around like they're waiting for a nursery rhyme to start. There are definitely big changes coming to the game.

It all started with the team wanting to look at Forza Horizon 4 as less of a vacation, and more like real life. Which means you need somewhere to live, clothes to wear, and a job to pay for it all - sleeping in your car is not an option in this game.

"It's the idea of living the Horizon life," says Ralph Fulton, chief creative officer at developer Playground Games. "And what if you were doing it not alone, but with everyone in the Horizon community that was playing the game at the same time? Forza Horizon 4 is a shared open world."

So the people that you meet will be real players, adding a variety and spontaneity that - Fulton admits - they could never recreate with AI. The team has worked hard to combat in-game trolling, so we're shown a quick demo, which boils down to the fact that a stranger can't collide with you. Friends? Sure, they can bash up your paintwork, but griefers won't be able to cramp your style.

There's also an option to opt out of the online universe altogether, and play offline whenever you choose. Being online is not compulsory. You'll still get a lot of the same experiences, all your friends will just be imaginary 'Drivatars'.

Fulton also explains that while racing will still be the main attraction to 99.9% of people who pick up a Forza game, you can progress to the 'superstar' level without ever breaking the speed limit. Progression points can be earned by giving cars custom paint jobs, tuning them, or even streaming on Mixer.

"I think it reflects the different tastes and motivations of our really diverse player base these days," says Fulton.

You can almost smell the crumpets

But back to that cottage. How good have they made Britain look? Enough to spark serious homesickness in someone who spent many a rainy school holiday in the Lake District. The game supports all the fancy HDR, Dolby Atmos and 60fps side of things too, so it can look as smooth as a freshly waxed bonnet. They take the thatched cottage scene and show us a full cycle of seasons. It's all rain on puddles, birdsong, snowy winter landscapes inhabited by deer, moving through to blue skies and blooming roses and baby rabbits.

"Over the course of the summer our art team visited this location many many times," says Fulton. "To the point that they became quite friendly with the locals."

Fulton describes this attention to the seasons as a "step change" for the series. The seasons are more than just cosmetic too; different weather will have different effects on different road surfaces and the feel. "They change the driving experience as well. You'll master driving in wet, dry, icy, snowy, muddy conditions. Temperature plays an even greater role than it has done before," says Fulton. "Every surface that you see - and there are hundreds and hundreds of surface types within the game - has a conductivity level which determines how quickly temperature is passed from the ground into the tyre. That gives an even greater level of depth to the handling in the game." Seasons also change the gameplay. A lake that just sits there all pretty for three seasons of the year might freeze over in winter, making the island at its center suddenly accessible. Different racing events, festivals and championships will also come at different times of year, so if you're bored you'll only ever have to wait a week for things to change.

It's interesting to see Playground Games experiment with the shared world systems that have made recent shooters like Destiny so addictive for the community, and it certainly seems like something that’ll suit the Forza Horizon formula. We’ll see when the game launches October 2, 2018.

Still looking to finish your rare car collection in Forza Horizon 3? Then check out our complete Forza Horizon 3 Barn Find locations guide to find them all.