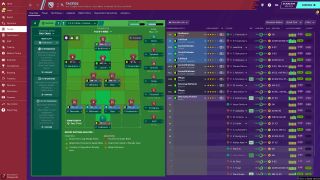 The world’s favourite dugout sim can be a strange beast when it comes to Football Manager 2020 tactics. Long gone are the days when you could just slap Messi, Modric, Hazard and Aguero into a position in a 4-4-2 and win match after match. Now, you need to pick a Football Manager 2020 tactic and give it some proper thought - or just let us do that part for you. We’ve tinkered and experimented with countless in-game strategies, taking into account new features such as VAR, to come up with the only Football Manager 2020 tactics guide you’ll ever need. Adopt and tweak these different techniques to fit your management style, and the players you're fielding.

Overview: This one is entirely down to the strengths of just a few players on the field. Wing play is exceptional if you've got wingers that can deliver pinpoint crosses and a big lad capable of dashing into the box to receive the cross, whether they're a centre-forward or a midfielder.

Check your wingers before you break this one out, as you want players with good numbers in acceleration, agility, crossing, dribbling, stamina, and technique to make this work well. I managed to get this working with West Ham by pairing up winger Yarmolenko with ageing 6'5" powerhouse Zlatan Ibrahimovic – as most of the work is being done by the winger, leaving your receiving player the task of getting the ball and setting it into the net.

As a bonus, wing play consistently provides entertaining goals to watch using the in-game replay system, as the ball falls from the sky and is hoofed into the net with extreme prejudice.

Don't use this if: You don't have the ability to get players into the box, or you don't have good wide players capable of landing crosses, this proves futile and frustrating. Bring on board some of these players, or find another tactic.

Overview: Tiki-Taka is a strong option for a wide variety of teams, but fast-paced European clubs like Barcelona are part of the group that brought it to the world stage. Tiki-Taka incorporates a barrage of short, quick passes that get your team up the field like a slightly nervous FIFA player.

Tiki-Taka is incredibly tricky to stop, which is part of the reason it's so effective. As you would expect, you need players that can pass to make it work, but they also need solid agility, decisions, stamina, technique and off-the-ball attributes.

Liverpool are a natural fit for this, and with a 5-2-2-1 WB set-up, you're giving Salah, Lallana and Firmino space to shine, while the rest of your team lock it down with Milner, Trent Alexander Arnold, Gomez and van Dijk offer the enemy a fearful task even if they can win the ball.

Try this out if you're a team that struggles in the air, as the ball is played low in Tiki-Taka.

Don't use this if: Tiki-Taka needs knowledge of the tactic and team cohesion to work, in addition to technical ability. If you're breaking in a couple of new players, Tiki-Taka is going to be difficult, but then if you change the tactic to something simpler, the rest of the team will be all out of whack. How then do you manage new entries to a Tiki-Taka squad? Time and patience seems to be the only answer.

Overview: Turning Tiki-Taka quite literally on its side, this is a much more direct approach, often involving playing the ball backwards and forwards through the enemy lines. Think of this like Tiki-Taka Extreme, in that it requires similar attributes to making that tactic work, but also players with cracking pace and acceleration to run the ball back and forth past the opposition.

Returning to Liverpool here, a 4-4-2 Diamond Narrow gives you substantial depth: you've got a trio of reliable finishers in Firmino, Mane and Salah, and plenty of class to back you up.

Don't use this if: If you can't make Tiki-Taka work, this Vertical variant is going to give you more of a headache than any points.

Overview: This one can be a bit trickier. Gegenpress, roughly, translates to "counter-press" and the idea is that you play on the break, pushing back hard whenever you get the opportunity, winning the ball upfield and constantly harassing the opposing team to gain any edge you can.

To make this work, make sure your entire team has good anticipation, natural fitness, stamina and work rate because your team is going to be buzzing around constantly looking for their moment. This also means you need to be ruthless and sub out anyone that's looking a little tired for a pair of fresh legs.

Get this working and it seems insurmountable for the opposing team. It's not flashy, but adhering to this and making it work keeps your team in the lead and opponents off-balance with blistering tempo. This is my "out of the box" strategy for West Ham, with players I'd generally describe as "scrappy" - perfect to make this work.

Don't use this if: Slower-paced more physical players are left behind with this set-up, and as soon as there's a chink in the armour you're in trouble. Weak spots can and will be taken advantage of by long balls, which can pull you apart and see plenty of goals being conceded.

Overview: Control Possession is in the "what it says on the tin" school of football, in that you're looking to dominate possession and patiently build chances. If you want stuff to happen immediately, this isn't the strategy for you, but it suits players comfortable with the ball, ball-player centre-backs and strikers with a mix of skills.

It's becoming overwhelming popular in many of the English leagues right now, and if your team has solid Stamina and Teamwork attributes, it could well be a good fit.

As it relies on a single striker, Tottenham are an obvious choice, with Harry Kane widely recognised to be one of the finest British strikers lacing up his boots.

Don't use this if: Teams with overly specialised players struggle here: every player needs to be able to carry his weight - and the ball - when the situation demands it. This requires first touch, passing, decisions and composure. The methodical playstyle could also stand to be a little more interesting.

The bizarre inverse of the Control Possession tactic, this one wants to weather the storm and then hit teams as soon as they let their guard down. This is the more creative version of Direct Counter Attack, and tends to be a little more fun to play with quicker teams, so that one makes our list, while Direct Counter Attack doesn't.

Again, this thrives with a single striker, so I've opted for Tottenham in a 4-4-1-1. It also favours similar attributes to the Control Possession style above, meaning players with acceleration, pace, decisions and composure are vital to make this work.

Don't use this if: Players get dragged out of position during the attacking phase, so fans of a more regimented approach might find this a little tricky. Worse, if your players don't have the stamina and work rate to push back towards those positions quickly, holes appear that teams can exploit.

Overview: Big Sam's big tactic, the whole point of Route One is to get the ball and hoof it upfield to let your team rattle up the pitch behind it. This one is a good laugh to play in a classic 4-4-2 style, as you need a target-man to catch the ball and keep it while support arrives, and then a nippy striker who can run in behind to actually score.

It's a tactic that, honestly, gets taken apart by top-flight football outfits, but it's bloody effective in the lower leagues, or in situations where you're fielding strikers that have a speed or strength advantage on the opposing team's defenders.

As a lower-league tactic, I tried this out with Sky Bet League Two side Grimsby, and it can be remarkably efficient for getting goals at this level of play. It can also "unlock" a team playing a rigid Gegenpress, although you’re relying heavily on your strikers to get the work done.

Don't use this if: You're playing in a top-flight league, whether that's in the UK or overseas. You might not get eaten alive, but it's highly likely.