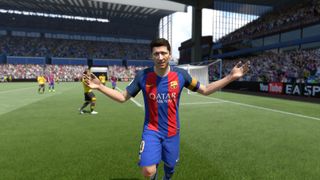 FIFA 17’s Ultimate Team is the most popular feature in any contemporary sports game – and every seven days the Team Of The Week sees 23 new cards added to the mode, with upgraded stats for the players who’ve performed exceptionally the previous weekend.

In a new GamesRadar+ regular, I’ll be analysing the new ‘TOTW’ every Friday morning in able to help you decide whether the cream of the crop are worth forking out big coins, often six figures, for – and recommending some cheaper investments who’ll deliver virtual gold further down the line. Here, then, are this week’s picks from Team of the Week 24…

Fresh on the heels of the Everton midfielder’s six-point winter upgrade, Gueye gets another two-point boost to an 84 OVR. That makes him over 100K more expensive than other 84-rated Premier League midfielders, but it’s a price worth paying: ratings of 80+ for pace, dribbling, defensive and physicality make him a far more accomplished all rounder than contemporaries Dele Alli, Juan Mata and Yaya Toure.

An 81-rated Championship centre back with few hybrid possibilities might seem a curious choice, but it’s that perceived unattractiveness which makes him worth picking up. See, plenty of FIFA players are ditching him at discard price (10,000) coins; and if you follow our FIFA 17 Ultimate Team coin guide that means he’s worth grabbing now to sell for profit in a few weeks’ time. Stash him in your club and you’ll make money come April.

In-form goalkeeper cards rated 85 or above are always likely to be useful in Future SBCs. Rulli is currently the cheapest in the game, at 22K – making him well worth a risk-reward punt. Vincent Enyeama (Lille) and Yann Sommer (Moenchengladbach) are the only two 85+ in-form GKs available for under 30K, so even if you don’t profit hugely, you’ll still likely make 3-4K by stashing him in your club and reselling at the optimum time. Also: tracksuit bottoms!!

… and three to avoid

Van Aanholt’s first in-form card is going for insane cash – close to 70K – for one reason alone: that 90 pace attribute. Which is bonkers. If you’re desperate for a Premier League left-back with similar speed, you can grab Alberto Moreno (pace rating 89) for 1,200 coins, saving yourself almost 69,000 big ones. And van Aanholt’s overall rating is easily surpassed by Cesar Azpilicueta (84) and Leighton Baines (83), who’ll cost you 4,400 and 3,600 respectively.

The Bayern striker is fantastic in-game even if you only splash out on his basic 90-rated card, at 150K. This new, 94-rated upgrade will cost you eight times that, at 1.2 million. If that 90 overall really isn’t enough, instead consider his 91-rated first inform (388K) or his 92-rated Team Of The Group Stage card (535K).

Kane, fourth in-form card, rated 90, is currently trending at 475K – more than double his 89-rated Man Of The Match card, at 208K. If you’re desperate to build your side around the Spurs striker, he has four cards available for under 100K - rated 87, 86, 85, and 84 – which will tide you over until the inevitable Premier League Squad Building Challenge, for which he's nailed on to be the main prize as last season’s top scorer.

Love FIFA 17? Don't miss our guide on how to maximise your coins from FIFA 17 Ultimate Team and our FIFA 17 Career Mode walkthrough.