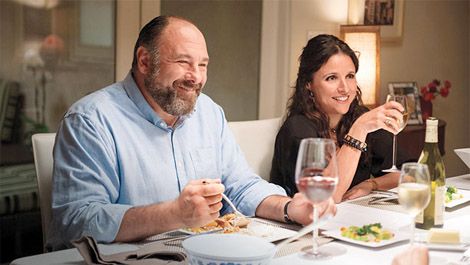 From her 1996 debut, Walking And Talking , to her last film, 2010’s Please Give , Nicole Holofcener has made a career out of writing beautifully for women. And so it goes with her latest, Enough Said , a wry look at middle-agers divorcing and dating, starring Seinfeld / Veep ’s Julie Louis-Dreyfus as Eva, a singleton masseuse living with her teenage daughter in Los Angeles.

Yet, ironically, Holofcener’s film is more likely to be remembered for its leading man. Though not his swansong, Enough Said is the first release to feature James Gandolfini since his sudden death in June this year. He plays Albert, a father-of-one still nursing the pain of his divorce. He cuts a vulnerable figure, and Gandolfini – so often cast as the gruff alpha male – plays it to perfection.

When the film begins, Eva is heading to a party with married friends (Toni Collette and Ben Falcone). There she meets Albert, who immediately takes a shine to her. At the same party, separately, she meets Marianne (Holofcener regular Catherine Kenner), and the two instantly strike a rapport. All of a sudden, things are looking up, as Eva has a new BFF and a new man in her life. The twist comes when Eva discovers there’s some shared history going on – news you might have guessed, but which she stumbles on before anyone else realises...

In a rare leading role, Louis-Dreyfus handles both the comedic and dramatic requirements of the situation adeptly, as Eva agonises over the dilemma thrust upon her.

Like all of Holofcener’s works, it’s exceptionally well-observed, assuming you like your films to focus on the smaller details in life. It won’t set your heart racing, and there are times when the central coincidence threatens to topple the whole script. That Keener’s character is a successful poet living in a designer house also seems improbable.

But flaws aside, it’s smart and consistently funny. ‘Nuff said.

Assured, adult filmmaking from a writer/director who knows her way around the ups and downs of relationships. It’s also a fitting tribute to the talent of the gentle, grizzly Gandolfini.