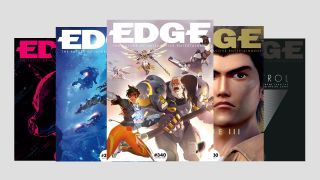 Since 1993, Edge has been the foremost authority on games and the industry that surrounds them. Whether you're an industry professional, an aspiring one or a passionately committed enthusiast, Edge's authoritative, wide-ranging coverage will help deepen your understanding of the most dynamic form of entertainment on the planet. With a new console generation including PS5 and Xbox Series X beginning in 2020, there's never been a better time to pick up an Edge magazine subscription.

Every month, Edge scours the globe for the biggest and best stories from the world of interactive entertainment. After a stellar 2019 in which we defied print's naysayers with a raft of world exclusives, 2020 promises to be another banner year for the UK's longest-running gaming magazine. Whatever the new generation of consoles brings, Edge will continue to serve its highly informed readership with its internationally renowned blend of news, reviews and features.

In every issue of Edge magazine you'll find: