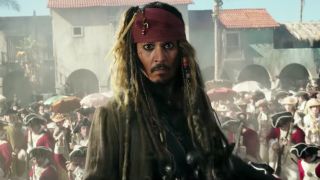 Pirates of the Caribbean: Dead Men Tell No Tales doesn’t sail into theaters for nearly another two months, but Disney decided to screen the film for some theater owners and press during the studio’s CinemaCon presentation last week. Full reviews of the movie are still under embargo, but we’ve collected a selection of Twitter reactions and are able to piece together the general feeling people have about the new movie.

The short answer: against all odds, Dead Men Tell No Tales seems like a nice surprise. The fourth entry, Pirates of the Caribbean: On Stranger Tides, was extremely disappointing and made the case that Johnny Depp’s Captain Jack Sparrow works much better in a supporting capacity than as the character with the weight of the entire film on his shoulders. These reactions seem to indicate that Disney learned the right lessons from that movie and have steered the franchise back into enjoyable waters once again.

You might be surprised to hear me say this but I really dug the new Pirates of the Caribbean movie. Action set pieces are a lot of fun. pic.twitter.com/mluWwqyU8rMarch 29, 2017

Also the action scenes are really well staged and easy to follow. So much better than the last one. #PiratesoftheCaribbeanMarch 29, 2017

Also has, in Kaya Scodelario @kScodders, the strongest female character in the franchise. #CinemaCon2017March 29, 2017

Pirates of the Caribbean: Dead Men Tell No Tales is a pleasant surprise. Continues the legacy, focuses on the characters and the world.March 29, 2017

Pirates 5 is definitely the best one since the first. Admittedly, that isn't saying much but it does occasionally capture that magic.March 29, 2017

The new Pirates of the Caribbean is a big step up from the lifeless 4. Back to the fun myth building, still miss Verbinski's imprint.March 29, 2017

Pirates of the Caribbean Dead Men Tell No Takes has most heart since first movie. (1) #CinemaCon2017March 29, 2017

Fans of #PiratesoftheCaribbean will not be disappointed. Pirates 5 is a very fun, action packed adventure w subtle nods to the ride itself.March 29, 2017

Directed by Joachim Rønning and Espen Sandberg, and starring Johnny Depp, Geoffrey Rush, Javier Bardem, and Kaya Scodelario, Pirates of the Caribbean 5 will be released in cinemas on May 26, 2017. If you’re interested, you can watch a featurette that includes some explosive new footage.