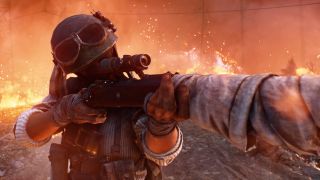 Many of the big new games of 2019 and beyond are exciting not just because of the talent behind them, but because we already know that many will also be coming to the PS5 and Xbox Series X over the course of the next two years.

Indeed, only a week after Techland confirmed that Dying Light 2 would be releasing on Sony and Microsoft's next-gen consoles, EA has come out and also revealed that its studios are currently developing titles for PS5 and Xbox Project Scarlett, even go so far as to promise a 2020 release window for some of the experiences it has in the works.

Speaking to shareholders during the publisher's first quarter earnings call earlier this week (via VGC), Electronic Arts CFO Blake Jorgensen promised that the company is "working hard on building games for next year on Gen 5."

Sony PS5 price - what will it be, and when will we know?

"I think that’s obvious", Jorgensen continued. "I think everybody in the industry is doing that. As has happened in the past, not all games will come out on Gen 5 immediately. Obviously, games like Madden, you probably bring the Gen 5 game out when the Gen 5 console ships, not when Madden itself ships. We’ll be ready on Gen 5, we’re very excited about it and we’ve been working on it for some time."

It sounds like we can expect EA's annual slate of Sports titles, such as its Fifa and Madden properties, to be cross-gen releases next year, launching on the PS5 and Xbox Project Scarlett once they come out, following their regular appearance on the PS4 and Xbox One.

Microsoft confirmed at E3 2019 that Xbox Project Scarlett would be releasing in Holiday 2020, and while we've had the PS5 confirmed by Sony, the company has yet to announce a launch period, but 2020 predictions are currently the bookie's favourites for that console too. Start saving up now, in other words, and you should be ready for a spanking new piece of gaming kit come Christmas next year.

Read up on the most exciting tech demos to get you ready for the next generation, or watch the Release Radar below for a guide to everything else out this week.