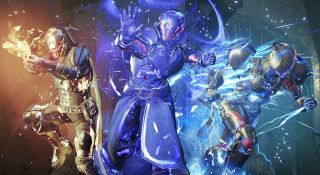 Destiny 2 update 2.1.4, which is scheduled to release on Tuesday, January 29, is making big changes to Super and weapon balance as well as several usability hangups. As Bungie explained in its latest This Week At Bungie blog post, the update will also address one of Destiny 2's oldest problems: day-one Power hoarding.

"To ensure an even playing field each time we kick off a new season, bounties acquired during previous seasons will have a maximum possible Power reward," Bungie said. "This change is intended to prevent players from feeling the need to hoard bounties and raid keys that grant Powerful rewards until the Power cap is raised in an attempt to get a leg up in the push toward the new Power cap."

Immediately, this means that any bounties you pick up before the start of Joker's Wild and the Season of the Drifter will only award gear up to 650 Power. As a result, players will no longer be able to fly up the Power ladder on day one of the new season, which is something hardcore players have been complaining about for months. By the time Black Armory's Scourge of the past raid was released, for instance, top players had already reached 645 Power or higher. This sucked a lot of challenge out of the day-one raid race, and the pressure to hoard Power made the lead-up less exciting.

The new bounty reward system should prevent this while incentivizing all players to try out the new content. As Bungie advised, it also means you should complete or discard any Powerful bounties you have before new seasons kick off, otherwise you'll miss out on the uncapped versions of those bounties in the first week of the new season. Note that this system is tied to seasons, not DLCs, so all players will be affected. Bungie also said it's "looking to address stockpiles of Raid Keys," so maybe don't get too attached to your mountain of Ethereal Keys.

Speaking of long-awaited improvements: update 2.1.4 will finally make the quest to unlock the Redrix's Broadsword pulse rifle more doable for average players. The quest still requires you to max out and reset your Quickplay Crucible rank five times in a single season, but previous seasons will now count toward this step. So, if you reset your rank five times in season three or four, for example, you won't have to worry about this step in the quest. It's by far the lengthiest part of getting Redrix, so it'll be nice to have it out of the way. (Update: This article previously incorrectly stated that the Redrix Broadsword quest will no longer require five resets in the same season. Apologies for the error.)

This will be Destiny 2's first major update after Bungie's separation with Activision.