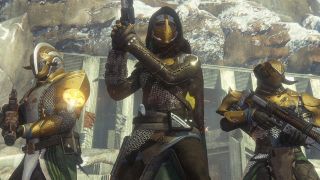 Destiny 2 is coming. We've got the official Destiny 2 reveal trailer, and a ton of leaked Destiny 2 details to fill in the gaps. But let's not forget the original Destiny is still a thing and currently undergoing it's final big event, Age of Triumph.

Destiny's Age of Triumph event has a very final feel - as Deej, from Bungie puts it, "we are celebrating the conclusion of the adventure of Destiny 1" - but that doesn't mean the game's done just yet. "Destiny 1 is still a game that will be there for players," say DeeJ. "We’ve planned to support it for the foreseeable future, so while we do have a sense of finality and closure as the theme of this [Age of Triumph] event, we are by no means turning the lights off on Destiny 1."

It sounds more like a case of archiving the current game for those who want to return, or for sequel newcomers who want to see where it started, according to DeeJ. "If players decide, as they move on to new worlds, to experience new adventures and be told new stories in those spaces, if they decide they want to revisit the things that they did in Destiny 1, the game will still be there for them. And, for someone who might join the adventure in progress, and they might want to go back to the beginning and discover how it all started? Those origin stories will be waiting for them."