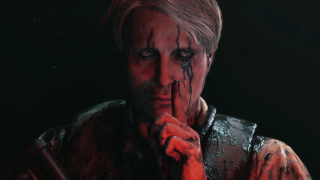 Hideo Kojima had a little something to offer viewers of The Game Awards in return for his belated Industry Icon award: new footage of Death Stranding. It's the most we've seen of Kojima Productions first independent game since we saw Norman Reedus' bare polygonal bum in the E3 2016 reveal trailer. And if you thought that trailer was weird, well, you haven't seen the half of it.

A man who looks a lot like Guillermo del Toro is seen clutching a pod with a baby inside, and runs under a bridge while tanks and planes covered in tentacles pass overhead, and black ooze seeps in below. At the end of the trailer, we see four skeletons dressed in soldier garb step through the shadows, attached via tentacles (or strands, eh?) to what appears to be a human soldier behind them. He removes his helmet, and reveals his face to be that of Hannibal star Mads Mikkelsen - confirming the wealth of rumors leading up to this reveal.

Still no release date, explanation of story, or what gameplay is going to be like, but regardless, Death Stranding is looking like one Kojima-ass video game.