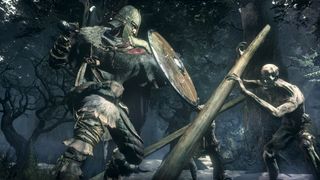 Dark Souls developer FromSoftware is working on a PlayStation VR title, according to an unlisted sizzle reel for the company's previous and upcoming games. The video shows projects stretching across FromSoftware history, back to King's Field and Armored Core on the original PlayStation and up through Dark Souls 3. It concludes with a slide labelled "FromSoftware, Inc. Next Title on PlayStation 4, Xbox One, PC, PlayStation VR" coming in 2017 and beyond.

All the other slides in the video (which was spotted by Reddit user 113mac113) also refer to "Title" in the singular when presenting multiple games, so From may be working on several projects for one or more of those platforms. Either way, it seems to be confirmation that the company is working on a game for Sony's virtual reality headset.

Playing Dark Souls in virtual reality sounds like a pretty good (read: terrifying) time, but as that video reminds us, there is plenty to FromSoftware beyond its beloved Soul series. A new Armored Core that puts you in the cockpit of your own customizable mech would be pretty rad, for instance, or the studio could take this as an opportunity to push an all-new concept into the spotlight.

PlayStation VR will come out this October, so hopefully we won't have to wait too much longer to find out what FromSoftware plans to do with it.