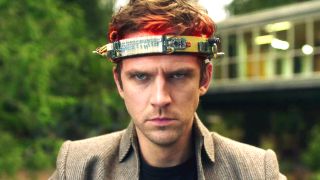 Legion season 1 was a blast. A weird, wonderful, mind-bending blast, but a blast nonetheless. Like no superhero TV show or movie that came before it, it had to be seen to be believed – and was arguably 2017’s sleeper hit. Twin Peaks-style sequences, silent movie homages, and, yes, big dance numbers. It had it all.

How is Legion season 2 going to top that? Lead Dan Stevens spoke to our sister publication SFX magazine about that very thing. The full story is in this month’s issue, out Wednesday, 28 March, but here’s an oh-so-tantalising snippet.

“Things get stranger and weirder, so I don’t still fully understand what’s going on,” says Stevens, who plays Professor Xavier’s son David Haller on the show.

With Haller trapped again at the onset of Legion season 2, that only opens up more fantastical possibilities for showrunner Noah Hawley and the team to play around with. “Are [Haller’s] powers going to be used for good and evil? And, who says which is which?” suggests Stevens, hinting at a possibly darker second season for the X-Men spin-off-but-not-quite-a-spin-off.

But one thing is for certain: among the surreal and sublime, we’re going being treated to a few toe-tapping numbers. “I really love that this show can entertain these musical interludes… It’s really going to become a feature of the show,” Stevens teases, which, if you’ve watched the show’s premiere, will know that it can boogie with the best of ‘em.

While Haller is still “very much dealing with this Shadow King” - the villain of the piece - here’s hoping Legion season 2 can double down on the beautifully bizarre. There’s no other show like it when it gets going – and (whisper it) it might just be the best superhero TV show out there.

For more on Legion season 2, you can read about the plentiful trippy goings-on in the latest issue of SFX, coming to a retailer near you on Wednesday, March 28.