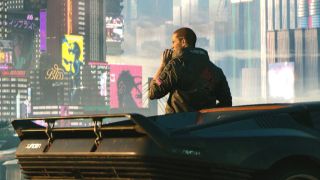 The head writer of Cyberpunk 2077 is trading Warsaw for Irvine with a new gig at Blizzard. Sebastian Stepien's employment change first surfaced via a quiet edit to his LinkedIn profile; we confirmed with CDPR that Stepien had left and The Hollywood Reporter heard from Blizzard that Stepien is now a part of its development team. Stepien had been with CD Projekt Red for 12 and a half years so it's a big change for him - but it also signals big things for Cyberpunk 2077.

Don't panic, Cyberpunk fans! A very good chance exists that said signalled things are not bad. It's distressing to hear about prominent creative forces departing from a game (or any project) in the thick of its creation, sure, but Stepien's work on the project may have already been done when he packed up his desk.

CD Projekt Red has been working on Cyberpunk 2077 for quite a long time. The top-level narrative direction of a head writer on a story-driven game is ideally the kind of thing that's finished up while other elements are still coming together. It'd be pretty cruddy to toss out a bunch of fully modeled, animated, and voiced characters because the writer decided the story should go in a different direction, right?

We still don't have anything close to an official date for when we'll get to play Cyberpunk 2077. However, if a CDPR employee who had been around since the lean, beardless Geralt days felt comfortable enough to leave it all behind, that could actually be a good sign. Either that or Blizzard just made him a really, really good offer, especially since it's probably eager to make up for all the talent it's been losing recently. Both are probably true, actually. Enjoy the caviar and SoCal weather, Sebastian!

Still worried about CDPR losing its storytelling chops? Read about why Cyberpunk 2077 is an RPG before it's a shooter.