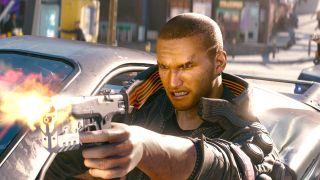 CD Projekt Red seems to be going all-in on player choice in Cyberpunk 2077. On top of deep romance paths, branching endings, and pacifist options, players will also have access to an extra-immersive Hardcore difficulty that disables the game's user interface - no UI markers, no indicators, just you and Night City.

"The most fun [difficulty setting] I think will be the Hardcore setting where we turn off the UI you live as well," UI coordinator Alvin Liu told WCCFtech in an interview. "And that will be a real challenge for a lot of players. Also, at the same time, if you want to play more casually for the story and maybe you’re not experienced with shooters, which was a real big concern for us. We want to tell a story and maybe you’re a big fan of The Witcher and you’re not comfortable playing a shooter, we have settings available for that. We even have weapons for that. If you recall from last year’s demo, we had a weapon called the smart gun, which helps you aim. The bullets were much slower and usually a bit weaker. But if your aiming isn’t your forte, you can always pick up the smart gun."

It's always nice to see a wide range of difficulty and accessibility settings available, and this Hardcore mode sounds especially interesting. Increasing enemy health and damage is all well and good, but stripping out the UI could add a much more transformative and interesting kind of challenge. I've always found that playing with unorthodox limitations is more fun than just raising the bar on execution, particularly in shooters and RPGs, so I'm pretty into this no-UI thing. Besides, anything that increases the percentage of Night City screened into my eyeballs can't be bad.

For more on player choice in Cyberpunk, check out this deep-dive on role-playing options, from Lifepaths to skills.