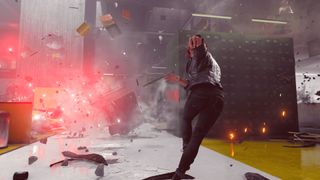 Control, which is officially our game of the year, still has plenty of secrets to uncover according to game director Mikael Kasurinen.

We spoke to Mikael to celebrate Control winning our best game of 2019 award, and couldn't resist asking him what his favourite Easter Egg in the game was. He told us: "It is the rubber duck, that angry quack gets me every time. It's been crazy how quickly people figured many of them out."

Kasurinen then casually revealed that players haven't discovered everything that Control is hiding: "Having said that, there are still some that people haven't found yet, though some secrets have a longer tail, and extend into the expansions as well."

Speaking of expansions, we also asked what we could expect from next year's AWE expansion, which looks like it's going to be an Alan Wake crossover. Kasurinen hinted: "It indeed is quite a coincidence! Maybe that gum you like is going to come back in style."

If that line about gum seems overtly cryptic, it's a line that David Lynch used to tease about Twin Peaks: The Return, so it seems very likely that Bright Falls' most famous resident will feature in some form.

We're huge fans of the surreal shooter here, with Sam Loveridge's glowing Control review going into why: "Whether it's the tension that's expertly drawn taught across the entire length of the game, or the constant surprises you're thrown as you navigate The Oldest House, it's clear that Control is going to leave a lasting legacy on video game history."

Check out what other games made our list for the year by watching the video below.