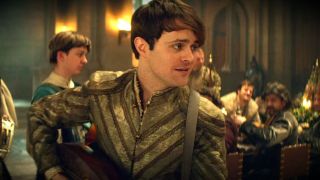 The impossibly catchy tune from Netflix series The Witcher is now a part of the original game, thanks to a modder.

Hubert Wiza, the mod's creator, posted a video from the 2007 game The Witcher, where a cutscene that originally featured Dandelion performing at The New Narakort Inn in the game's third chapter has been replaced with a performance of 'Toss a Coin to Your Witcher." Check it out below (but know that GamesRadar+ is not responsible for this song getting stuck in your head again).

Wiza has made the cutscene available on Nexus Mods, and writes in the YouTube comments that he'll be adding even more to it, including "a furnished interior, new characters, animations, and improved camera movement". The modder will also be adding another cutscene with a different song from the Netflix series, and alternative cutscenes with a song from the Witcher fan film Alzur's Legacy.

'Toss a Coin to Your Witcher' debuted at the end of the series' second episode, performed by Jaskier actor Joey Batey. It's gotten several trap remixes and the meme treatment, and is currently my shower song of choice. Composers Sonya Belousova and Giona Ostinelli put the song up on SoundCloud for you to listen to whenever your heart desires.

The show's popularity is undeniable - Forbes reports it was the second most popular show on Netflix of 2019 and its success has ushered in a revival of The Witcher 3: Wild Hunt gameplay. Such a revival, PCGamer reports that the game reached 100k concurrent players on Steam for the first time ever just this past week. That's a lot of coins being tossed.

If all of this Geralt hype has inspired you to dive into The Witcher 3 (it did for me), then you'll want to check out our essential Witcher tips.