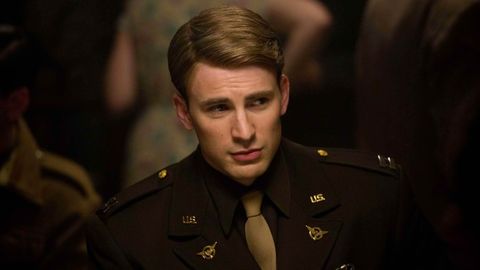 If the biggest obstacle with Captain America is not turning a flag-wearer into a flag-waver, job done. Following the Marvel template, it’s more about individual pluck than national pride; less a salute to Uncle Sam than a fanfare for the little man – as embodied by Steve Rogers (a digitally emaciated Chris Evans), a “90-pound asthmatic” unfit for military service, circa 1942.

And so to the next-biggest obstacle: being an origin story, hoops must be jumped through before battle can really commence. Joe Johnston’s film doesn’t exactly dally, but does seem to be in competition with Batman Begins to see who can hold out longest before revealing its hero in full super-regalia.

Schmidt is pitched as a Nazi so unhinged he offends other Nazis, but turns out to be more mouth than trousers (and no nose, a la Voldemort). Weaving has fun hisssing his linesss, yet Cap’s most famous foe isn’t the holy terror he should be.

Still, if Chris Evans tones down the brash from his other comic-bookers Fantastic Four and The Losers – which may be a blessing for some – his Cap isn’t the square he can sometimes be on the comic-book page.

And if Joe Johnston lands closer to Stephen Sommers (specifically the toy soldiering of G.I. Joe) than Steven Spielberg (Raiders’ period setting/modern feel is a stated influence), he manages to pull out the stops for the finale: an explosive confrontation above the clouds that then quiets down for a touching farewell.

Of course, Cap’s fate is already decided: like Thor, Iron Man and co, he’ll return in next summer’s The Avengers. Obstacle number three, setting up the Marvel mega-movie, is tackled without tripping over too many signposts, though a reference to Odin does serve as a reminder that Captain America doesn’t quite hit the nail on the head as well as Thor.