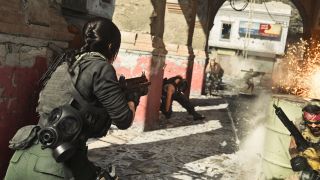 Original story: Call of Duty: Modern Warfare Season 2's trailer has leaked, giving us an early glimpse of what to expect from the shooter's next update.

With the new season only one day away, it's due to release 11 February, the new trailer has surfaced online, first spotted by COD Tracker. The trailer shows off new battle pass information as well as four new maps, including fan-favourite Rust. In addition to this, two new weapons were shown in the trailer, although, given the few seconds of footage, the guns are still yet to be identified. They will almost certainly be quite deadly though.

Rust
Arguably one of the best maps in Call of Duty history, Rust makes its return in Modern Warfare Season 2. Hopefully, Rust receives a complete reimagined map design, like the recently released Shipment.

Zhokov Boneyard
As a reimagining of the Call of Duty: Modern Warfare Campaign map, Zhokov Boneyard looks to be returning as the new battleground for popular game mode Ground War.

Bazaar
If you’ve played the Modern Warfare Campaign, you’ll recognise Bazaar as the Hometown of freedom fighter Farah. It also looks as though Bazaar will be the new map for Gunfight.

Two new weapons were shown in the trailer leak, although they are still yet to be identified, they could well be the previously leaked GRAU 5.56 assault rifle and Strike 45 SMG. With the GRAU described as "lightweight, manoeuvrable and full of potential," the Striker was labeled a "hard-hitting and long-range SMG.", according to Gfinity esports.

The Season 2 update is set to launch on Tuesday February 11, for Xbox One, PlayStation 4, and PC.

There’s no indication on the exact time for when the new season will drop, however, if previous updates are anything to go by, a 1PM EST / 6PM GMT launch is pretty likely.