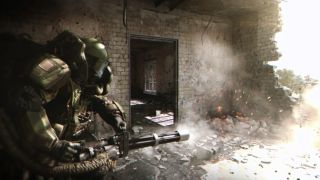 Call of Duty fans, you can finally rest easy: Call of Duty: Modern Warfare will have dedicated servers and support crossplay at launch. According to a Game Informer cover story (via Charlie Intel), Infinity Ward and Activision are confirming that alongside full crossplay support for PC, PS4, and Xbox One, Modern Warfare will feature dedicated servers to ideally help ensure stability at launch and beyond.

Dedicated servers aren't anything new to Call of Duty, but with the introduction of crossplay support to the franchise with the upcoming Modern Warfare, it's even more crucial to ensure stable server performance by forking out for dedicated servers. With the pervasive issue of server instability in online competitive gaming, it's a big relief to hear it's quickly becoming commonplace for AAA developers to address the issue before it becomes an issue.

Of course, the announcement of dedicated servers is far from a 100% guarantee that Call of Duty: Modern Warfare will launch completely free of server problems, especially with the series' patchy history in that regard. Regardless, it's certainly a step in the right direction.

As for crossplay, it'll work similar to Fortnite, where matchmaking is input-based. That means players using controllers will be paired with other controller-users, and mouse & keyboard players will be paired up likewise. As for PC players looking to play with console-based friends, Infinity Ward has come up with a seemingly workable solution; in these situations, teams of mixed input players will be matched with other teams comprised of both mouse & keyboard players and controller players.

We compiled a handy guide of every killstreak available in 2019's Call of Duty: Modern Warfare reboot.