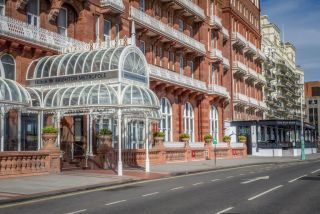 Virtual reality, unsurprisingly, will be the main focus of this year’s Develop. The conference, which takes place in Brighton from July 12–14, is introducing a substantial VR track, while precursor event Evolve will also train its sights on what the arrival of VR and AR means for the future of game development.

Vanguard’s Martin de Ronde, co-founder of Guerrilla Games forebear Lost Boys Games, will deliver a session on the pitfalls and opportunities inherent in converting established genres to VR – the shortest route to getting a project up and running perhaps but, as we’ve seen from the first wave of VR titles, not necessarily the best one. Meanwhile, Triangular Pixels’ John Campbell and Katie Goode will address the isolating effect of HMDs by talking the audience through what they learned while creating their own local social virtual reality games.

Elsewhere, the need for more precise physics to make the most of position-tracked controllers will be covered, along with the surprisingly tricky task of making an effective VR UI. More sessions will be added over the coming months, but this track is already shaping up to be a useful resource for both new and established developers as the industry fumbles its way into an era of massmarket virtual reality.

Communicating new ideas is also the focus of this year’s Funding track, a topic that spills over into the Indie track and which will be accompanied by an inaugural Funding and Pitching Workshop – aimed at micro studios and startups – as well as a Games Funding Forum. Heading up this thread, former SCEE director of strategic content, and newly minted indie developer, Shahid Ahmad will share his insight into what companies look for in developers and their pitches. His talk, Pitching Is Courtship, will lean on the experience he gained while working for Sony, during which he commissioned over 100 games, including VR titles.

Italic Pig writer and director Kevin Beimers also sees the romantic side of pitching. Another developer who has been on both sides of the pitching process, Beimers will deliver a talk titled Pitching, Pick Up Lines And Polyamorous Marriages that looks at how you can start building a long-term business relationship with potential partners from first contact. Other funding and pitch‑related sessions will talk attendees through the specifics of accessing tax relief, how to put forward successful funding applications, and how independent developers can make the most of crowd funding.

The Indie track will cover a range of less zeitgeisty topics, too. Among these, Machine Studios’ Simon Roth will explore how crunch has become as commonplace in independent development as it is in big‑budget projects, and discuss ways to ensure that meeting milestones doesn’t have a negative impact on your team. Extra Mile Productions’ Max Videaux will look at ways to avoid crunch altogether – or at least try to minimise it – by reducing red tape and streamlining workflow. And James Parker, from Ground Shatter, will offer up a candid look at the struggles experienced by third parties when bringing PC games to console.

Away from the nitty gritty of necessary admin, building business acumen, and keeping the lights on, conference keynote session Legends On The Future: Hideo Kojima In Conversation With Mark Cerny should provide a fascinating mix of nostalgia and speculation. The pair will first discuss Kojima’s three-decade-long career in game production, before moving on to what they believe the future holds for the videogame industry.

Meanwhile, Funomena CEO Robin Hunicke will deliver the Indie track keynote, using Wattam to illustrate ‘feel engineering’, the art of teasing out novel emotions from players while ensuring that every aspect of a game reinforces its underlying themes and narrative.

And Bossa Studios takes a similar tack for its Design track keynote session, celebrating its passion for esotericism by exploring how technology has surprised, inspired and even annoyed during Worlds Adrift’s development.

For an event that seeks to provide practical takeaways, this year’s Develop appears to fulfil its remit. But more than that, its expanded scope represents a confident, and energetic, start to the UK conference’s second decade.