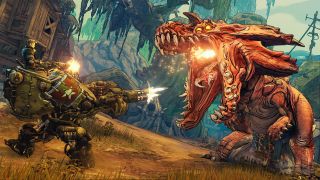 Borderlands 3 is finally increasing the level cap for Vault Hunters later this month, as part of a major new update which will also introduce a new seasonal event, Broken Hearts Day, for players to take part in.

The Valentine's Day themed event, which will land as a free timed mode available to all Borderlands 3 players, allows Vault Hunters to hunt down "lovesick enemies" across the galaxy for a chance at gaining special rewards, including new and exclusive Legendary weapons.

Ranking the best Borderlands games, from Common to Legendary

The event will only last for one week, and can even be toggled on or off in the main menu, but a far more permanent change is also included as part of the update, one which raises the Vault Hunter level cap from 50 to 53. This doesn't, however, include new additions to each character's skill tree, instead giving you three more points to invest in your Hunter's existing build.

The changes were outlined in a new "Community Love Letter" posted on Borderlands 3's website, which also promised a number of additional features heading to the game in the coming month, such as the ability to skip cutscenes, and quality-of-life improvements to gameplay mechanics like Fight for your Life.

Speaking on the latest episode of The Borderlands Show, Borderlands 3's Live Lead Graeme Timmins also revealed more about the looter shooter's future, including details on changes to True Vault Hunter Mode, the arrival of Mayhem 2.0, and when we can get our next glimpse at the game's second DLC expansion, the first trailer for which will drop during the Gearbox Panel at PAX East on February 27.