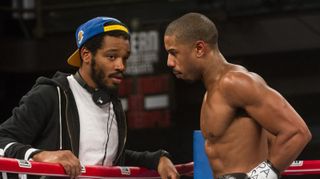 Marvel Studios confirmed that Michael B. Jordan will be playing the villain known as Erik Killmonger in Black Panther at San Diego Comic Con over the weekend, and taking on the role of a bad guy marks a bit of a change for the Creed star. Talking to MTV, Jordan explained why he ultimately agreed to play the part:

"It was always something that I’ve wanted to do. To play something completely different than any other character that I’ve ever played before. And under the right circumstances, this being it, you know. I feel safe. I feel safe to take those risks. Take those chances. That’s what I’m about to do".

Black Panther isn't the first time Jordan has starred in a comic book movie; He played Johnny Storm aka Human Torch in 2015's Fantastic Four, but that didn't turn out as well as anyone hoped. The "right circumstances" he mentions in the interview is likely in reference to Black Panther's director Ryan Coogler - with whom he has a fantastic working relationship with thanks to Fruitvale Station and Creed - and also the fact that it's a film set in the MCU and Kevin Feige & co have proven that they know what they're doing when it comes to superhero moviemaking.

The prospect of Jordan bringing the charisma and intensity we've seen from him previously to a villainous role is exciting to ponder, and it could be a great opportunity for him to showcase more of his acting repertoire. Couple that with everything else Black Panther has going for it, and it's little wonder why it's one of the most anticipated films on Marvel's upcoming slate.

Directed by Ryan Coogler and starring Chadwick Boseman, Black Panther is released in UK cinemas on February 9, 2018 before opening in US theatres on February 16, 2018.