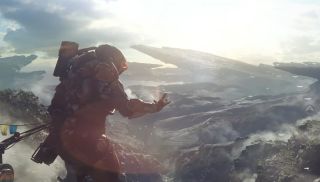 From yesterday's teaser you may have thought Anthem reminded you a little of Titanfall, Destiny, and Mass Effect, and to be honest, the demo played at today's conference did little to temper those comparisons.

Described by EA's Patrick Söderlund as "truly special", the demo gave us a taster of what lies in store for the Freelancers (i.e. you and your buddies) who venture beyond the wall.

Trussed up in their Javelins - Anthem's answer to high-tech exosuits - Freelancers can explore terrain both from the air and below underwater, with each suit offering a "unique play style" and "devastating combat".

And it's here the comparisons really kick in. The savage world offers large-scale, dynamic world events (Destiny's Public Events, anyone?) and plenty of wandering enemies to keep your firearms busy as you roam the lush, looks-a-little-like-a-Mass-Effect-cum-Destiny environment.

Oh, and it also looks as though the game's available for four-player co-op, too.

Anthem will be available on 4K Ultra HD and HDR, enhanced for the new Xbox One X. It's scheduled for a 2018 release.