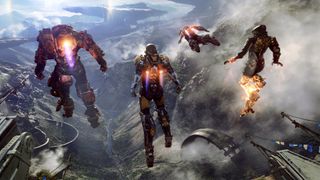 Are you on the fence about BioWare's new Anthem game, the new BioWare game that debuted at E3 2017? Well, maybe this will help you make up your mind. Drew Karpyshyn has confirmed that he will be working on the game, presumably penning the story and some major characters.

If the name doesn't ring any bells, Karpyshyn was the lead writer of Knights of the Old Republic, as well as Mass Effect and Mass Effect 2 (so the good ones - ohhhhh snap, no he di'n't). He's also written a plethora of novels, including the Darth Bane trilogy and his own original work, the Chaos Born trilogy.

We didn't get much of a look at Anthem's story during its teaser at the EA Play event nor its gameplay demo during the Xbox press conference, but I can't imagine Karpyshyn would be involved if the game's plot was going to take a major backseat. A big part of what made KOTOR and the ME trilogy so beloved was Karpyshyn's fiction and characters; hopefully we'll get the same for Anthem.