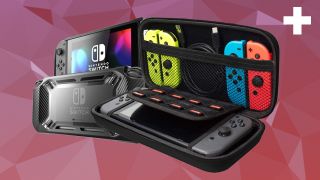 There are advantages that the best cases for Nintendo Switch provide that the console itself does not. Storage of games or the fiddly Nintendo Switch SD cards it relies on for expanded storage, for example. Drop a Micro SD once and you might find it, drop it again and it’s gone forever. And with capacities up to 256GB available at reasonable prices, that’s a lot of data to mislay on the carpet. If that’s what you’re looking for, then consider one of the soft cases, often made from leather-like material, that will protect the screen of your Switch from scratches while zipped up, and is perfect for throwing in another bag for those days when you want to carry your Switch around with some books and perhaps a gaming laptop.

Then there are harder cases, often made from some soft of impact-resistant plastic. These offer a better degree of protection, perhaps if you’re throwing your Switch into the back seat of a car, or want something that remains attached to the body of the console while you play. Whatever your needs, we’ve got you covered with our Nintendo Switch case recommendations below.

This case is larger than the official Nintendo one, meaning you can also fit in extra cables or another pair of Joy-Cons for some four-player action out in the wilds. A neat internal flap covers the screen ensuring the case's other contents don't scratch the screen. We also like how it's big enough to put the Switch in with a cover like the Mumba armor mentioned earlier in this article. Available in multiple colours.

This is the official Nintendo Switch carry case kit. Sure, it costs a little more than some of the other options, but at least you know you're getting a quality-made product approved by Nintendo - it's arguably the best Nintendo Switch case out there. It comes with a screen protector and space to store the console, two Joy-Cons and five game cards. The black case is the standard version, but we've also spotted a red Super Mario Odyssey edition, although that one's a bit rare nowadays and increasingly expensive.

This tough protective case upgrades the armour rating of your Nintendo Switch in portable mode and has plenty of grip to ensure it doesn't slip out of your hands. If your Switch is played in handheld more often than on TV, this is a great option. It's worth noting though that you need to remove this case to put the console back in the dock for TV play and there's no screen protection if dropped face down beyond the protruding analogue sticks. We'd combine this with a zip up carry case (like the one below) to keep the screen free from accidental scratches. Available in multiple colours.

Not found the right match in our selection above? Not to worry, there are plenty of cheap options available in our comparison chart below from multiple retailers.