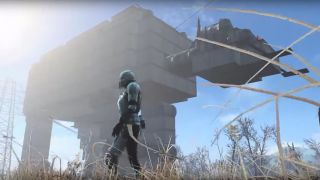 Since Fallout 4 launched back in 2015, the community has been very busy indeed, and not just with surviving the apocalypse. No, the community has been busy creating some of the most impressive and best Fallout 4 settlements we've ever seen. Whole communities of builders have been taking to the various social media platforms to show off what they've made. Designs are growing ever more inspired and elaborate, and thanks to user-created mods, and Bethesda’s own extensive DLC releases, apocalypse architects have more options at their disposal than ever.

We’ve picked out some of the very best Fallout 4 settlements around for you to admire. Perhaps you’ll even want to recreate them in your own Commonwealth - though you’ll need to set aside more than a few evenings, we reckon…

Looking for help with Fallout 4? Then check out our guides:

Let's start simple, as lots of people have spent lots of time simply trying to turn back the nuclear clocks by recreating what once stood. The most obvious (and popular) candidate is the Castle, once known as Fort Independence. As TornadoATP here demonstrates, using the concrete foundation blocks (found, improbably, in the wood section of the settlements menu) is the way forward, and fills the gaps rather nicely. In fact, concrete foundations are probably the most important settlement element going as they're one of the few objects that are allowed to clip into the ground, meaning you can use them to even out gaps caused by undulating terrain.

And here's what happens when you fill in the rest of the Castle. Jakenburch has made a fortress of the fort, reinstating the artillery, setting up enough turrets to cut through a Raider army and making the whole place self-sufficient. Best of all, see that little balcony inside the tower built around the radio mast? That houses a fully-stocked bar (that no Settler will use because the boring denizens of the Wasteland never take time off). Speaking of radio masts, they usually signal how high you can build, meaning settlements with extra-large antennas can be built taller than others - it's worth looking out for before you start spending scrap on some doomed skyscraper. Outpost Zimonja is a good place to start for those with lofty ambitions.

Spectacle Island comes with the game's largest building area and, apparently, its highest built limit, meaning it's one of the most versatile locations going. Exonar has gone outwards instead of upwards, building a seaside shanty town complete with a nostalgic, no doubt toxic, high-rad pier. Spectacle Island is one of the tougher settlements to unlock (and don't read on if you consider the explanation a spoiler). You have to travel to a sunken ship, flip a switch, then either fight an onslaught of Mirelurks (including a Queen and, possibly, a Legendary Deep King) or run to the nearby radio tower and activate a pulse that scares them off. Worth it, though.

Sometimes, you just want a bit of Old World charm, which is why _atsu turned Jamaica Plain into a lovely little urban town centre, hustling and bustling like you'd hope for. It's a properly planned town, rather than a loose collection of shacks huddled around a big phallic symbol made of light panels like everyone else makes. For me, the triumph here are those strings of light bulbs, lending the whole place a Christmassy feel. The creator agrees - apparently getting the notoriously fickle placement right took about three hours per four wires worth of bulbs. I won't be doing that, then.

Some of my favourite builds are where players have just committed to an idea, rather than trying to make as much as possible. Where I saw a floating impossi-town, Time_for_Stories saw a homely restaurant, and made a genuinely inviting place of the early game gas station. It's the attention to detail I love here - al fresco and interior dining areas, the Mutfruit plants used to give it a garden feel, the statue on the stairs. I would eat here, if I didn't know it was definitely selling Bloatfly tartare and staffed by people whose arm might fall off into my sandwich.

Another in the series I like to call, People Who Had My Idea But Way Better, Thanatos- also saw the Red Rocket roof as the perfect place to store power armour. Except I built a sort of pokey bunker, and they made an enormous, multi-level showroom with space for 58 separate suits. It's sort of disgusting how well thought-out this is, from the circular metal pieces giving each station an escape pod vibe, to the toolboxes next to each one letting you store broken parts. Be right back, I'm just burning my settlement down.

RockKincaid went to the trouble of finding every single stat-boosting comic book in the game, and it's only right that they honour the rags of yesteryear with an appropriate resting place. In classic nerd fashion, the shop has every magazine stored by title, which I appreciate. It's also got a pop culture memorabilia section, with bobblehead storage, plus the Silver Shroud and Grognak costumes on display, making this the new prime destination for thieves and people with ponytails.

The delightfully-named Taffington Boathouse by digigur is just so idyllic, a slice of coastal charm in the wasteland. Half farm, half riverside boardwalk, it features a yacht and a huge, paddle steamer-inspired houseboat. Threat of raider attacks aside, Taffington's adorable wooden cabins look like something you'd rent out for a peaceful summer holiday

It takes an unfathomably large amount of power to use the lightpads, not to mention some very specific resources, and even then you have to connect to terminals to get it to work as you want it to. What I'm saying is that making something like 4chan_r9k's tribute to the land of the free takes an enormous amount of incredibly tedious work. So, you know, kudos. Nice treehouse in the background there, too.

How selfish that we all think of how best to make settlements for our own gain? I know my Sole Survivor is committed to creating a better world for all of the Commonwealth's nicest people, so why haven't I followed Hookatore's lead? I stuck Dogmeat out in the Sanctuary rain, while they went all in and made the little guy a home for his house (which looks better appointed than my actual bedroom, by the way). This is by far my favourite of the lot. Magic.

Doright36’s underground lair deters unwanted visitors with fake radioactive waste, deadly automated defences, and hidden doors. Inside, however, the spacious settlement within is a dream, fully kitted out and ready to cater to every need of its inhabitants. The attention to detail is incredible - with its armory, workshop, pantry, mess hall, bathrooms, living quarters, and even showers, it’s completely believable as the home of an entire wasteland army. Even if there are a few conspicuous Marvel movie references thrown in around the place…

The hermit crab-esque movement of Howl's Moving Castle might not have quite made the move to Fallout 4, but there's no doubt that Imgur user MichaelMartin has captured its essence. Built from a variety of different pieces of Fallout gubbins, it still manages to have all the strange turrets, lighthouse and ship parts jutting out from its hull.

Jordandrenglish’s colourful city, built at the Spectacle Island settlement site, is absolutely huge, featuring a business district, main square, shops and bars, apartments, a power plant, and more, all bathed in pleasing neon glows. The scale is incredible - and the creator admits they only stopped expanding because their PS4 could no longer keep up. Framerate dips seem a small price to pay to get to explore this metropolis.

In an attempt to beat all other settlers, NexusMods user grod4L has casually built an entire city as his Fallout 4 settlement. Known as Sanctuary City, grod4L used a plethora of mods to create the stunning settlement, and put them all together using the in-game editor. Impressive. Take a little tour around Sanctuary City on imgur and get ready to catch your dropped jaw.

Towering above Downtown Boston, this Scrap Dragon is a seriously awesome work of scrap. Player kavkavkav created the metallic beast using rusty cars and motorbikes (check out his claws), scaffolding, pylons and other post-apocalyptic metal sources. Just don't try and sleep in this settlement, it doesn't like it.

When you can create, why not create an homage to one game inside of another? Well, that's exactly what Fallout gamer GPG Shepard has done in Fallout 4, with the settlement based on BioShock Infinite's floating city of Columbia. And it's utterly perfect, from the statues to the lurid colour scheme. Plus, it's actually built above Boston's lighthouse, just kind of floating there.

Ummm there's an AT-AT behind you

Not only is this a life-size AT-AT, it's also a hotel. Snuggle up to the walls of this Star Wars Imperial walking tank, made entirely by Ops_Specialist, which is actually filled with more home comforts than you'd expect. George Lucas would think it needs more lasers though. Take a look:

Looking for the next great game to play? Then check out our list of the best new games 2019.