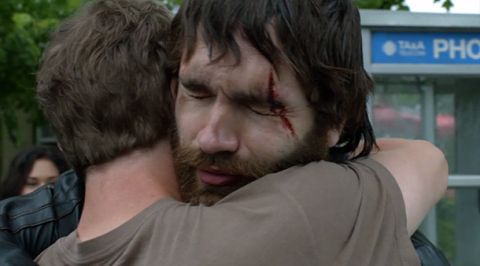 THE ONE WHERE Josh gets giggly, Aiden gets groggy and Sally gets jiggy

VERDICT One of the biggest revelations of last week’s episode was that the new and improved Sally had two additional ghostly passengers along for the ride. Cue a whole series worth of horrific – and comedic – potential. This plot point is dismissed in the first few minutes of this episode, though, when we find that Josh and Nora have arranged for the witch to perform the blood magic on both Nick and Stevie’s bodies, so they’re no longer trapped inside Nora, but are running around inside their own bodies once again. This was the only low-point of an otherwise excellent episode, and when the episode finished, it still felt like a cheat and a cop-out. Why introduce the concept if it’s going to be settled between episodes? Of course, the writers might be playing the long-game, and might introduce other complexities associated with Sally’s former passengers. Let’s hope so.

All new series need a big bad, and this episode introduces us to Connor and Brynn’s dad, Liam. When Liam kills a nest of vampires at the start of the episode because they have his son’s wolfed-out head on the wall, he’s immediately established as a force to be reckoned with. A pure-bred, with all the confidence and arrogance that comes with that status.

Our three heroes’ reunion scene is nicely handled, too. Over a year has gone by since they were all together, and when Aiden meets his roommates they’re both human. Sam Witwer performs this scene with exactly the right amount of tenderness and comedy. Aiden is none-too-pleased when he discovers that Josh and Nora used blood magic to bring Sally back, however.

Josh’s announcement to Sally that he’s going to propose to Nora rings so many alarm bells. If this were Downton Abbey , it’d pretty much be a guarantee that Nora is about to die, and while she doesn’t die in this episode (at least that we know of), her confrontation with Liam leaves us in no doubt that she’s in serious trouble. Conversely, the scene where Josh walks along the street and looks up at the moon – only now appreciating his new-found human status – is a delight.

Aiden (unwittingly) buys baby blood as he’s still too weak, and he needs untainted human blood to survive (Sally’s blood is no good, as her reanimated status apparently makes her blood as useless as vampire food) and when he’s attacked by a pack of wolves (in human form) his progeny – Henry – saves him, and takes him home where Aiden discovers that Henry has been keeping a girlfriend locked up, trapped inside his apartment so that she doesn’t catch anything transmittable in the outside world. Aiden – of course – frees her, and Henry’s reaction is exactly what we have come to expect from Henry: violent and uncompromising, while at the same time tinged with disappointment.

Nice to see Sally make the most of her newly-corporeal form, and the fact that she’s now not stuck in the same garments in which she died gives her the opportunity to glam up, and boy, does she! Aiden’s not the only vamp in town, it seems!

Such a shame, then, that when she meets a friend from her old life and takes him home to fool around, he cries off, as he’s feeling ill. From too much gin, he thinks. Nuh-uh. His contact with Sally has condemned him to die. Well, if she will go ignoring witches’ warnings about keeping clear of people form her previous life…

REVELATION OF THE WEEK Nora went through a punk-slut phase, and still has the clothes.

BEST LINES
Conrad’s father: “When I finish it will rain blood and ashes and the leeches will know: see a pure-bred and run!”

Sally (seeing Aiden): “He looks like a serial killer from the ’70s.”

• Read our other Being Human US season three reviews