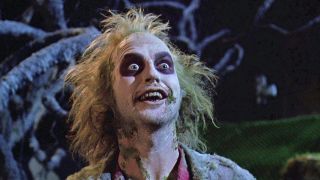 Beetlejuice, Beetlejuice, Beetlejuice! Tim Burton's dark comedy masterpiece turns 30 today, making this weekend an excellent opportunity to enjoy its grotesque visual style mixed with expertly-timed comedy courtesy of star Michael Keaton. But even if you don't sit down for a re-watch, you might still appreciate learning some new trivia about the film, courtesy of writer Larry Wilson.

Wilson sat down with Yahoo! News to discuss the movie's anniversary, and revealed a few fun tidbits you might not have known. For example…

Beetlejuice originally had a much darker ending

In the final cut of Beetlejuice, Lydia's family, Adam, and Barbara all live (er... exist, I guess, since the latter two are dead) together in happy harmony. Lydia gets an A on her school test and celebrates with a mambo, backed by a team of ghostly football players. But in an alternate ending, Lydia got the wish she'd been longing for the whole film and died.

"She died in a fire and was able to join Barbara and Adam in the afterlife," Wilson said. "A couple of people said to us, 'Do you really think that’s a good idea? Is that really the message you want to be sending to the teenagers of the world? Die in a fire?'"

While it could've still been somewhat happy (a lesson about how those that die are never really gone, perhaps?) it does feel more morbid than the ending we got. Probably for the better.

In one draft of the script, Lydia had a sister

One of Beetlejuice's strong suits is how it doesn't belittle the character of Lydia for being a bit strange and different. She contrasts against her hoighty toighty parents, but what teen doesn't? But at one point, Lydia's Goth-ness was contrasted against a sister character, who would've been more conventional, Wilson said.

Wilson spoke about sending his writing to Warren Skaaren, a "script doctor" who would help tighten and punch-up drafts, and what Skaaren contributed to the final product: "Warren got rid of the sister. And what a good decision because then it all became about Lydia. That’s the [change] I remember most vividly, [I remember] going, 'That's right.'"

It almost had a (really, really) bad title

"Beetlejuice" is an iconic name. When you say it, anyone even passingly familiar with pop culture from the '80s will know what you're talking about. But Wilson told Yahoo! that not everyone was a fan. Some feared it was too gross, too inscrutable. They suggested something so mundane and pedestrian that it's hard to imagine ever being attached to a Burton film.

"The title that I remember being suggested, pretty much before the release, was House Ghost," Wilson said. "I bet it was [producer] David Geffen who said no to that, and a big firm no. There were marketing people within Warner Bros. who thought no one would know what 'Beetlejuice' was, but they’d know what a house ghost was. Thank God [they went with Beetlejuice]. I would not like to be here talking about House Ghost the movie."

Wilson had an idea for Beetlejuice 2 right away

You may have heard about a proposed Beetlejuice sequel tentatively titled Beetlejuice Goes Hawaiian - a truly awful idea motivated almost solely by the amount of money the first film generated at the box office, and which would've been basically a retread of the original, but now in... well, it's right there in the title, isn't it? However, Wilson had a different idea, though it never got much further than that:

While a direct sequel may not be in the card, Wilson is working on a spiritual successor of sorts. "My wife, Cynthia, and my step-son, John, and I are writing a script called Just Buried together. It’s kind of, in some ways, a story of Cynthia and my very unlikely romance in the world of Beetlejuice. It’s a couple that dies just before they get married and they have to figure out how to get married in the afterlife."

Here's hoping their plans don't get derailed by a Harvard-attending, Black Plague-surviving con artist of a ghost.