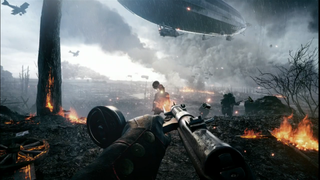 Battlefield 1 is looking even more intense thanks to the new trailer that debuted at EA Play.

The big new developments announced during the show are in keeping the multiplayer experience fresh and different with every match. Environmental destruction has always been a big factor in the Battlefield franchise, and the new game promises to make that happen more intuitively.

Another change is dynamic weather. Battlefield 4’s maps included some weather changes, but they happened at set times in each fight. In Battlefield 1, the weather will be unpredictable, meaning players will have to adapt to changes in sun, rain, and fog from game to game. Expect that to impact tactical choices and the challenges posed by each environment.

The E3 trailer reinforced the horrors of war, showing a soldier with his ears ringing after a pistol fires inside a tank. “Visceral” has been a word frequently thrown around in discussing the upcoming game, and that bears through in the close-quarters experience. Axes are now among the ranks of melee weapons, joining sabers and bayonets and shovels.

The vehicle developments are also big, literally. There will be three behemoth class vehicles – airship, armored train, and battleship – for even bigger and badder fights. The aerial dogfights in the trailer are impressive, showing the giant air vehicles under siege from nimble biplanes. Oh, and a flaming zeppelin can also come crashing out of the sky. Yes please.

The game will have an open beta later this summer prior to the worldwide release on Oct. 21.

Anna likes games about solving puzzles and/or shooting things. She wishes she could trade zingers with GLaDOS and have beers with Garrus Vakarian in real life.