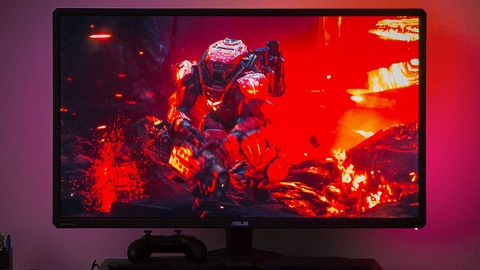 One of the best monitors we've seen in recent months; excellent images, smoothness and design, all in a console-focused monitor

The gaming monitor market is wide and varied and keeps growing to cater for a variety of needs, but mainly the trend is that they're only for PC players. The ASUS CG32UQ aims to change that. It's one of a new (ish) wave of monitors designed specifically with console gaming as the primary focus. And it makes sense. PC players can choose from a range of monitors covering their needs - like the best G-Sync monitors or the best G-Sync compatible FreeSync monitors - while console gamers who don't play at a TV have less options.

But does the ASUS CG32UQ warrant its place in the market? Is it worth its not-inconsiderable price tag (around $800 / £780)?

Straight out of the box, it's immediately obvious that this is an ASUS monitor. And that's a good thing, as the company makes some of the nicest monitors going when it comes to bold, strong aesthetics. The CG32UQ is no different: it's design is strong in its geometric lines from monitor corners to stand and base. Hexagons appear throughout the monitor's design, and even infiltrate and influence the layout of the menu screen.

There's also quite a thick bezel all the way around the 32-inch screen (though when I say thick, it's about 0.3in / 1cm on the sides and top and 0.6in / 1.5cm on the bottom). Although it's not wafer thin like on other, perhaps more 'stylish' monitors, it is very much in keeping with the CG32UQ's chunky overall style and does not look out of place on - or to the detriment of - the screen. Indeed, that chunkiness is a solid feature throughout. The monitor weighs quite a bit (20lbs / 9.1kgs), so there's no chance of wobbling or toppling off a desk.

It will take up a little bit of desk space, however; the base of the monitor has large controller pads as two of its three feet that blend into the design pleasingly well. That solid aesthetic doesn't limit the monitor's movement or adjustability though, and there's a decent enough range of movement both up and down the monitor's stand and in its tilt forward or backward.

There's a smattering of exciting features in the CG32UQ; some will feel familiar to the PC gaming monitor crowd, but all are arranged to be great for console gaming while retaining the qualities of a good gaming monitor as well. Despite being console-focused, it should be said up front that this would also hold its own for PC players.

Starting with the obvious, the screen is a VR panel at glorious 4K resolution with HDR thrown in. It's got a DisplayHDR 600 rating too, which is pretty good for a gaming monitor but not quite as high as the best gaming TVs. Nonetheless, when you combine this with a DCI-P3 95% color gamut, you're in for an excellent visual and colorful treat for the eyes. DCI-P3 is the prevailing color space for digital cinema pictures and is fast becoming the benchmark of quality that all screens clamour for, with the high 90 percent-range becoming a genuine sign of color excellence. Simply put, 95% on a gaming monitor is great stuff (even when it's not an IPS panel). In the numbers game, the CG32UQ's quality is backed up further by more solid numbers: it has a peak brightness of 600 cd/m2 and a max contrast ratio of 3000:1. Again, one may see higher results on a 4K television, but cranking out such numbers on a gaming monitor is great going.

Away from the guts of the monitor, the hexagonal-themed menu is full of quality customisation options - much more so than you'd find on a gaming TV. The stand also incorporates some function into its form by including two USB ports that enable one to charge controllers through the monitor itself. Neat. There's also a really handy remote which allows for much easier access to the settings menu, not to mention the on/off function. Round the back there is a decent handful of ports too: three HDMIs; one DisplayPort 1.2; and an audio jack. It would have perhaps been nice to see a USB-C in there too to really embrace versatility and future proofness, but you can't have it all.

Lastly, there are some RGB flourishes to be found here. While such lighting can be garish, it can also be very fun and tasteful, particularly if subtle. The CG32UQ very much does the latter with rows of LEDs on the back that produce HaloSync Aura lighting. This projects light from the rear of the monitor to match whatever's happening on the borders of the screen to make it easier on your eyes and cast a pleasing, synchronized haze against the wall.

All the design, build and features of the CG32UQ combine to create an awesome monitor. And, naturally, this is absolutely confirmed by doing the usual - and most important - test of playing games on it for a good long while.

Metro Exodus enables the monitor to demonstrate what its contrasts and colors are really capable of: fire, orange subtitles, and anything in the red 'area' of the spectrum are incredibly intense, for example. What's more, the overall picture is very well balanced and painterly. Because this monitor utilises HDR and 95% color gamut, the colours are rich and vibrant, and the contrasts are strong and clear - each color, shade, and tone is distinct.

The other end of the spectrum in terms of lush and bright pictures is The Division 2. The CG32UQ is a great portal into such a busy post-apocalyptic world. Everything is crisp and gorgeous here. The colours are punchy, and even smoke, fire, and haze is clear on-screen. This is confirmed by a dip into Apex Legends, where the shooter is vivid and smooth on both PC and PS4. Just as a final confirmation, Days Gone, the PS4 exclusive, is excellent to behold on this monitor. The weather types are clear and the lighting and landscapes are wonderfully executed.

If you use your console as a means to access Netflix or play Blu-rays on - or you want to at least retain the option to do so - then this is a perfect monitor for that too. You'll get all the 4K HDR benefits you would on your main telly, and that wonderful picture quality to boot.

Before we wrap up, let's discuss using the CG32UQ as a plain PC monitor. Simply put, it's a joy. The display presents Windows, websites, and software with exceptional clarity, making it great for work and general productivity. Even the speakers, with sound by Harman/Kardon, will serve you pretty well - for monitor speakers anway, and until you get your hands on one of the best PS4 headsets or similar.

It really is great to see a seriously high-quality monitor focused on console players. And it's even more pleasing to now know that this transcends that niche and might well be one of the best gaming monitors overall right now. It is certainly one of the best 4K monitors for gaming that money can buy, anyway. It's one of my absolute favorites that I've tested as well, and I'm incredibly tempted to get it myself. You'd be loathe to go back to a non-HDR, non-high DCI-P3 scoring, non-4K gaming monitor after having this fill your eyes. With gaming setups becoming more and more diverse and multi-device led, such a monitor is therefore a great thing to consider. It's ideal for a console gamer who wants to have some form of simultaneous quality for their PC usage, and it really does hold its own as a PC monitor. It warrants as close to a perfect score as I can give it, and only misses out by not being a little bit cheaper.

ASUS CG32UQ review: "A monitor that succeeds in being console focused but that also excels every other way"

One of the best monitors we've seen in recent months; excellent images, smoothness and design, all in a console-focused monitor