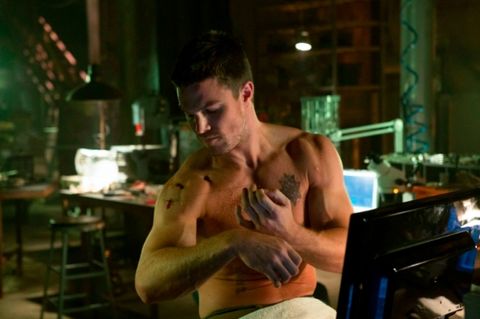 THE ONE WHERE: As Arrow investigates crooked businessman James Holder the mercenary assassin known as Deadshot arrives in Starling City, forcing Oliver into an uneasy alliance with the cops…

THE VERDICT: Crack gunslinger Deadshot brings some DC cred to the third episode of this fledgling series. His one-eyed target-scope preserves something of the look of the comic books but, iconography aside, it’s an otherwise underwhelming debut, giving us precious little chance to marvel at his legendary marksmanship - his showdown with Oliver should have been an Olympian combat, trading bullets against arrows, but feels all too perfunctory. An earlier action scene as Oliver enters Deadshot’s hotel room is equally a disappointment, victim of some confused editing (in fairness to the director, there’s some impressively staged parkour elsewhere in the episode, and some great POV camerawork allows us to crash through the island undergrowth alongside the castaway Oliver). Deadshot aside, it’s an episode that edges into police procedural mode, giving us a glimpse of Oliver the detective, tracing the provenance of a bullet in a manner Batman would surely approve of. David Ramsey’s Diggle continues to be the most engaging character on the screen, and the fact that he now knows Oliver’s secret identity will surely push him closer to the Alfred role we’re all expecting.

EH?: So why is it called "The Lone Gunmen"? Surely there's only one?

TRIVIA: Deadshot’s more of a veteran fixture of the DC universe than you might imagine, making a tuxedo-clad debut in the pages of Batman 59, way back in 1950. He popped up in the season 10 Smallville episode “Shield”, played by Bradley Stryker – and Kevin Smith included the malevolent marksman in his unmade 1996 screenplay Superman Lives .

DID YOU SPOT?: An overdose of in-jokes this week: mention of “the Jurgens case” references creator Dan Jurgens while Deadshot’s body is tattooed with an inky litany of victims that includes Green Arrow writer Andy Diggle and members of the show’s production team. There’s a shout-out to the fictional land of Markovia, home to Geo-Force in the DCU, and the fact that Deadshot’s holed up in room 52 just has to be a reference to the company-wide New 52 reboot.

HMM: Given the Andy Diggle tattoo on Deadshot, and the reference to Diggle losing his brother in his deadly line of duty, could the two possibly be related?

BEST LINES:
Oliver: “So what do you think? Great spot for a nightclub or what?”
Tommy: “Sweet! Though I’ve got to tell you, man, if you’re thinking about calling it Queens, I don’t think you’re going to get the clientele you were hoping for…”