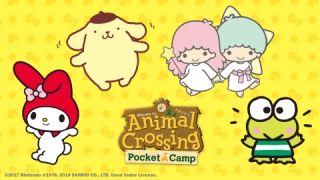 While cats are a common sight in the Animal Crossing series, I don't think they've had ones quite as famous. Starting later this week, Animal Crossing: Pocket Camp will feature items from Hell Kitty and other Sanrio properties.

Sanrio is a Japanese company that licenses, designs, and produces products for Hello Kitty and Aggretsuko. This promotion in Pocket Camp is part of the Sanrio Characters Collection event where players can collect sofas, beds, dresses, hats, and other items featuring Sanrio character designs.

“Nintendo and Sanrio share a love of fun characters and bringing smiles to people’s faces,” said Nick Chavez, Nintendo of America’s Senior Vice President of Sales and Marketing. “This partnership represents the latest example of our goal of finding new and creative ways for fans to engage with Nintendo IP.”

You can check out a breakdown of what's coming to Pocket Camp below:

Pocket Camp has seen other crossovers with games like Splatoon 2 and Super Mario with special in-game items and cosmetics of their own. Super Mario Maker even had a Hell Kitty-themed event so we're not walking on new ground here.

Animal Crossing: New Horizons, the next mainline game in the village life series, was announced at E3. It revamps the series by letting you design a town of your own on a deserted island. It's set to launch in March of 2020.

Looking for some of the best sales in gaming? Check out the best Amazon Prime Day game deals.