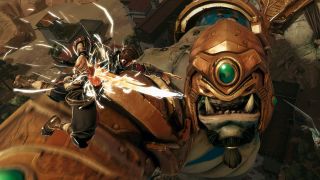 In a year when most of the big press conferences at E3 2017 were jammed packed with games, particularly the Sony and Microsoft presentations, it might surprise you that there are a huge number of games being showcased at the convention (and even announced for the first time) that didn't make it on stage. It's a great reminder that the press conferences aren't the end of E3 and of the importance of the show floor, especially for people watching from home who don't get to experience these games live. Even with the conferences getting longer and and putting more focus on the games themselves, a lot of great titles end up on the cutting room floor. I've rounded up some of the best of the rest to help give these standouts their due.

Almost immediately after the Nintendo Showcase, this surprising exclusion was announced: a proper 2D Metroid game for the 3DS. Billed as a "reimagining" of Metroid 2: Return of Samus, the new title seems to have everything fans crave from a side-scrolling Metroid - a classic map that's revealed as you explore it, weapon and item upgrade pickups, and snappy shooting. It's an interesting move in the wake of the extremely well-received fan reboot of Metroid II, AM2R (Another Metroid 2 Remake), but Samus Returns includes a number of features not found in the original, like full 360-degree aiming and map pins to mark locations to return to later. It's primarily being developed by MercurySteam, makers of the Castlevania: Lords of Shadows series, but it's still got that Nintendo level of polish and attention to detail on which that company's reputation was built.

Extinction has one of the easiest elevator pitches of this year's bumper crop of games, making its exclusion from the press conferences slightly puzzling. It's basically a western take on Attack on Titan, one of the most popular anime of the last decade, complete with giant monsters being bloodily dismembered by human beings with wicked blades and incredible acrobatic skills. But the bloodshed in Extinction isn't limited to the towering giants; the game also features hordes of smaller humanoid enemies who unleash tremendous sprays of blood when slashed apart. There's something almost painterly to all the splashing blood, and it suits the rest of Extinction's art style, which has a bright, vivid, florid aesthetic that perfectly suits its subject matter.

Yakuza is a franchise I'm incredibly happy to see being regularly localized for the West, and a series that's getting stronger and more refined with each iteration. That trend looks set to continue with Yakuza 6, which has been already been available for some time in Japan but will release worldwide in early 2018. It picks up from the events of Yakuza 5 and sees main character Kiryu submitting to a stint in prison to atone for his past crimes. After three years, he's released back into society, but finds that the world  has changed and the children he's fostered with it. Yakuza 6 promises to expand on the explosive, over-the-top melee combat the series is known for, as well as the massive array of side activities and mini-games, and is being billed as the final chapter in Kiryu's decades-long saga.

The first Ni no Kuni was a remarkably beautiful game with incredible promise that struggled mightily with repetitive, grindy combat which choked the momentum of its charming, fish-out-of-water narrative. Ni no Kuni 2 looks to change everything but that gorgeous aesthetic and innate charm, bringing a more action-focused, direct control style of combat to the series. It esches the Pokemon-esque monster battling mechanic to focus on the main character Evan and his two companions, who must fight to reclaim the royal Evan's lost kingdom. We'll get to soak in its Studio Ghibli-esque charm this coming November.

The next project from the Square Enix spin-off studio, Tokyo RPG Factory, Lost Sphear borrows a lot from its predecessor (the promising but ultimately kind of middling I Am Setsuna), but promises to rethink and improve on much of what fell flat in that title. The active time battle system from I Am Setsuna has been tweaked and refined, allowing players greater control and versatility, like the ability to swap the position of your characters mid-battle. The story follows a  boy whose village and its people are vanishing due to some mysterious phenomenon; you and your party must rescue them and preserve the fabric of reality through the power of memory.