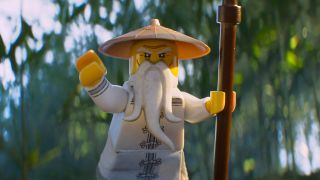 Lego! Kung fu! Robots! Warner Bros' next movie in The Lego Movie cinematic universe might not be what you expect, but it's definitely got everything. With it hitting cinemas on October 13, 2017, our sister publication SFX magazine sat down with The Lego Ninjago Movie director Charlie Bean to talk about bringing Ninjago to the big screen and how they made Lego minifigs do kung fu.

1. You don't need to know Ninjago

It may have spawned numerous toy sets, video games, a TV show, and more, but if you’re not a pre-teen (or the parent of one), chances are Lego Ninjago has passed you by. Newbies have nothing to fear, however. “I think we were really aware that unless you’re ten-years-old you probably haven’t heard of Ninjago, so we wanted to make sure the film didn’t only play to fans,” Charlie Bean says. “It’s an introduction to the crazy world of Ninjago–if you know nothing about it, this is your place to start.”

2. It's a massive genre mash-up

“It’s all the things I love!” laughs Bean when asked about Ninjago’s unique blend of geek-friendly ingredients. “It’s ninjas and giant robots and kung fu, and part of what’s so fun about it is mixing all these genres. But at its core it’s an emotional story about family, and that’s what I think sets the Lego movies apart. It’s about Lloyd [the Green Ninja] and his father [Garmadon] who left and hasn’t been there for him. Lloyd is the hero and his father is the villain, so it plays out on this grand, almost ridiculous scale, but it is really a story about a father and a son.”

3. It's in the Lego Cinematic Universe

While Cartoon Network has its own long-running Ninjago: Masters of Spinjitzu animated series, this is not a continuation. “We take the basic canon of the show, the characters and the concepts, and tell our own story,” says Bean. In fact, it slots more comfortably into the block-based world established in The Lego Movie and The Lego Batman Movie. “We’re very much in the same... Lego Cinematic Universe,” the director explains. “The aesthetic from the beginning has been stop-motion with Lego, and this is also very much in that vein. Also, the tone and irreverent brand of humour that all the Lego movies have connects them together.”

Despite having an extremely limited number of points of articulation, the Lego minifigure stars of the film won’t be shying away from martial arts. “They don’t bend at the elbows, they have no knees... That’s kind of a beautiful challenge,” says Bean. “Real choreographed kung fu with that limited articulation? It’s so much fun to solve that problem!”

5. Jackie Chan advised on the fights

As well as voicing mentor figure Sensei Wu, Jackie Chan was on hand to help with the fight choreography. “He’s literally a kung fu master!” Bean points out. “Working with him was a rare honour.” Chan was, however, sceptical about working with the film’s plastic stars. “The first thing he did was move his arm in a really stiff way, and he didn’t think [Lego kung fu] would work. So I showed him some of the tests we’d done, asked him to trust me and said to choreograph the moves as he would normally do them. Then we’d follow him and figure out how to interpret it in Lego!”

For more sci-fi and fantasy news, features, and review, pick up a copy of the new issue of SFX magazine or subscribe so you never miss an issue. This month there's a Red Dwarf exclusive AND a Star Trek supplement up for grabs!