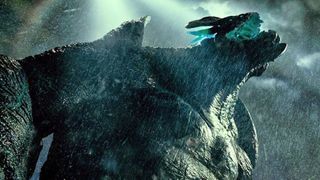 What is it about monster movies that makes you feel exhilarated and yet utterly terrified to go to sleep at night? Maybe it's the realism of the special effects. Maybe it's the endless inventiveness of filmmakers, coming up with new ways to make creatures scary. Or maybe it's more straightforward: the love of being absolutely scared witless without any repercussions whatsoever. Whatever it is, this genre isn't going anywhere, and it looks like there's many more terrifying tales yet to be told. This list compiles 25 of the best so far. Ready to go on a monster hunt?

The movie: Adapted from an off-Broadway musical adaptation of a 1960 Roger Corman horror comedy, Frank Oz's version of the story finds Seymour (Rick Moranis), a kind-hearted shop assistant, in quite a predicament. He's forced to find victims for a demanding plant.

The monster: Who doesn't love a man-eating plant? Audrey II (voiced by Levi Stubbs) looks like an oversized Venus fly-trap. And instead of eating flies, it feasts on human flesh. But it's funny.

The movie: An action comedy horror starring Kevin Bacon as a handyman called Val whose small valley town falls under threat from a race of gigantic worms. The townsfolk unite to battle these subterranean beasties! Bacon once considered it a career low, but it's really no way near as bad as The Darkness.

The monster: Giant multi-tongued worms known as graboids that live underground and pop up to devour humans. Their speed is also darned impressive considering their hefty ballast. It's enough to make you grateful for tarmac.

The movie: A Norwegian mock-doc that follows a trio of enthusiastic film students (think Blair Witch but less map banter) who stumble across weary troll hunter Hans (Otto Jespersen). He's sick of doing the government's dirty work, so agrees to be filmed going about his business with both horrific and hilarious results.

The monster: It's all right there in the title! Trolls of various shapes, sizes and temperament. They have one thing in common: they enjoy the dank environs under bridges and they despise humans. A lot.

The movie: Guillermo del Toro's love letter to Japanese kaiju movies. Raleigh Beckett (Charlie Hunnam) is one of a rare breed of humans who can pilot giant robots, but he'll need to find a new partner if humanity is to stop the kaiju threat. It's neon-drenched and ultimately optimistic about the nature of humanity.

The monster: Take your pick: the Pacific Rim universe is crammed with giant monsters, including one with a head like a shark, one vaguely like a scaly gorilla, and one named after Boris Karloff.

The movie: Joe Dante's classic creature feature is set at Christmas, when Billy (Zach Galligan) receives a Mogwai called Gizmo as a present. But he fails to pay attention to the care instructions and soon the whole town is overrun with mischievous gremlins. It's a dark, dark comedy.

The monster: Initially cute and cuddly, Mogwai turn nasty if they're fed after midnight or get wet.

The movie: Famously made on a shoestring budget without a script by first-time director Gareth Edwards (you might recognise his work from a small movie called Rogue One). Monsters follows a photojournalist (Scoot McNairy) and his boss' daughter (Whitney Able) as they attempt to get to safety when an alien race lands.

The monster: Tentacle-y, squid-like extra-terrestrials who have invaded Earth, and are causing chaos in Mexico.

The movie: Joss Whedon's ode to horror movies of the past is a meta-mashup of epic proportions. As the title suggests, the flick revolves around a cabin in the woods where a quartet of pals find themselves for the weekend. Are they alone? Are they buggery! Before long, someone messes with a old dusty artefact in the basement and it's game over...

The monster: How many do you want? Practically every monster you could imagine makes an appearance towards the end when things go a bit haywire and they're all accidentally released. Vampires, werewolves, zombies, giant snakes, psychotic murderous unicorns... they're all game for some slice n'dice.

The movie:  Yep, it's another people-get-locked-in-with-hellbeasts-with-no-escape situation. This time the patrons of a bar fall prey to an attack from two savage beasts and their offspring, and barricade themselves in. Forced to fight, they take on the monsters despite the odds. Talk about a lock in...

The monster: A seriously ugly mofo, with protruding fangs and a bulky build. They're also fond of shagging deer heads.

The movie: Shaky-cam victim-eye-view of an alien attack on the Big Apple. When the Statue of Liberty is decapitated, it's just the beginning of a night of terror as New York is devastated by a giant, hulking extra-terrestrial.

The monster: A skyscraper-sized alien with massive, elongated limbs and a lot (a lot) of brute strength.

The movie: Larry Talbot (Lon Chaney Jr) heads home to the remote Welsh village where he grew up, hoping to reconcile with his estranged father. Instead he succumbs to an ancient curse and turns into a wolf. It's not Universal's most stylish monster movie, but it's got a certain melancholic charm.

The monster: A werewolf. THE werewolf, really. Universal had made an earlier werewolf movie, but this was the one that really codified the rules.