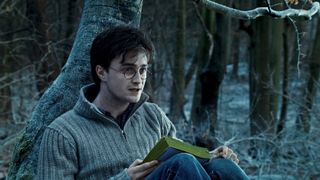 The wand may choose the wizard, but it's the fans who choose the best moments from the Harry Potter series. Everyone has their favourite: some pull the nostalgia-strings stapled to your heart, others are just plain exhilarating to watch. A couple might not even feature magic at all - hearing Hagrid tell Harry what he is for the first time or seeing Potter's parents smiling down on him from the Mirror of Erised is enough to bring a lump to any fan's throat. But what made it to number one? Take a look at our list and find out!

The Monster Book Of Monsters

The Moment: Trust Hagrid to land his students with a textbook as vicious as any of the magical creatures found within its pages. The Monster Book Of Monsters is a wonderfully mischievous creation, with each copy making a toothy bid for freedom every time it is opened until Hagrid reveals the magic trick of tickling it along the spine. Brilliantly, this renders them docile. Easy when you know how…

Better On Film? It works well as a recurring piece of physical humour, particularly when poor Neville attempts to keep his copy under control…

The Moment: In preparation for the Yule Ball, Professor McGonagall attempts to teach her young charges a little decorum, starting with an impromptu walz lesson, assisted by a thoroughly embarrassed Ron. With much of McGonagall’s role revolving around House discipline, its nice to see her enjoying a bit of humour for a change.

Better On Film? Maggie Smith has one of the less showy roles in the series, but she is never less than excellent whenever she is on-screen. This laugh-out-loud scene is no different.

The Moment: Not for the last time, Harry and friends put their necks on the line in order to help one of Hagrid’s beloved magical creatures, as they attempt to sneak a baby dragon out of Hogwarts. Naturally, Malfoy gets wind of proceedings, and so begins a frenzied race against time before the pesky Slytherin can raise the alarm…

Better On Film? The scene is cut entirely, with Norbert the dragon said to have been released by Dumbledore rather than Harry and Hermione.

The Moment: Poor Professor Trelawney is something of a Hogwarts laughing stock, what with her hippy-dippy dress sense and wildly hokey soothsaying techniques. However, her prophecy over Harry turns out to be true some four books later (“either must die at the hand of the other for neither can live while the other survives”), whilst more immediately, her remark that “the servant will break free and set out to rejoin his master” comes to pass as Pettigrew escapes that night!

The Moment: In a signature moment of light-hearted humour, Rowling calls-back to a remark made by Mrs. Weasley at the beginning of the book in which she warns the twins not to blow up any toilets this year. When Harry is recuperating in the hospital wing later in the book, he receives a toilet seat from the twins as a get well soon present. It’s a small moment, but it makes us smile nonetheless.

Better On Film? One of many such moments to feel the wrath of Chris Columbus’s editing axe.

The Moment: Dumbledore’s brother Aberforth makes his first appearance in book five, but rather than any one specific moment, what is most memorable about him is the alleged charge of “practising inappropriate charms on a goat.” No further details are provided, suffice to say that the character’s every appearance is usually accompanied by a goat reference of some kind…draw your own conclusions.

Better On Film? Thus far his appearances have been fleeting, but Ciaran Hinds will be fleshing out the role in Deathly Hallows pt. 2, as Aberforth comes to lend a hand at his brother’s old stamping ground.

The Moment: Preening buffoon Gilderoy Lockhart begins his first Defence Against The Dark Arts Class in spectacular style by releasing a jar full of mischievous pixies amongst his unsuspecting class. All hell duly breaks loose, with Lockhart all at sea, before a freezing spell from Hermione restores order at last.

Better On Film? Kenneth Branagh is a treat as the tiresome Lockhart, whilst the expressions on the frozen pixies are priceless.

What Dreams Are Made Of

The Moment: As the series takes a marked turn for the macabre, Order Of The Phoenix sees Harry plagued by a series of increasingly horrific dreams, one of which sees kindly Arthur Weasley brutally attacked. We later learn that this has happened in reality, lending an added sense of menace to every time Harry falls asleep.

Better On Film? The dreams are even more vivid in the film, with a particularly unsettling image of a suit-wearing Voldemort sticking in the memory long after the credits roll.

The Moment: Our favourite Hogwarts ghost has to be down-in-the-mouth drama queen Moaning Myrtle, one of the Basilisk’s victims the first time the Chamber of Secrets was opened who now spends her days, “sitting in the u-bend, thinking about death.” Who hasn’t felt like that every once in a while?

Better On Film? She’s every bit as stroppy and self-pitying as she is on the page. Which is just how it should be.

The Moment: The quest section of the final book has oft been criticized for excessively slowing the pace, but its genius is in showing us how Voldemort’s rise has strained relations between even the closest of friends. As Harry and Ron snipe at each other with increasing malice, a disconcerting tension steadily builds, aiding the impression that our trio of heroes are really up against it this time.

Better On Film? Sadly, the film starts to drag at this point, with Harry and Ron coming off as whiny rather than strained. It’s a relief when the action restarts to be honest.

George is GR's resident movie news person, based out of London. He understands that all men must die, but he'd rather not think about it.