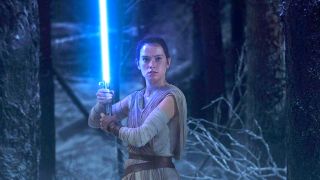 Everyone dreams of being a Jedi Knight at some point in their lives, especially now that Star Wars: The Last Jedi is nearly upon us. Mastering mind and soul to become one with the force, brandishing your own personal lightsaber with its unique designer accoutrements, and wearing ill-fitting robes to look as wise and sagely as possible... what's not to love?

Sadly, the promise of Jedi-hood remains but a distant pipe dream for us lowly humans, so the next best thing is to become a walking well-pool of knowledge on science fiction's greatest religion, by swotting up on these top 10 facts about the Jedi Order. Read on below, and make Yoda proud.

The word "Jedi" has its roots in Japan

The word ‘Jedi’ is derived from the Japanese word “jidaigeki”, which translates as “period drama” (specifically samurai TV soap operas). George Lucas says he saw a jidaigeki episode in Japan around a year before A New Hope was made, and the word stayed with him.

Lucas’s first treatment for A New Hope mentions Jedi in the opening sentence – albeit in a slightly different form. Star Wars was “...the story of Mace Windu, a revered Jedi-bendu of Opuchi who was related to Usby CJ Thape, a Padawaan learner to the famed Jedi...”

Samuel L Jackson would eventually play Mace Windu in Star Wars Episode 1: The Phantom Menace, some 25 years after those words were first written.

In Star Wars lore, an order known as “Je’Daii” came before the modern Jedi. The Je’Daii studied and used both the light and dark sides of the Force equally.

The origins of the lightsaber

The Jedi order was founded as a religious organisation, focused on studying, and worshipping the light side of the Force. The Jedi detached themselves from emotion, living as monks as they explored the galaxy – before settling on the ice planet Ilum, where they discovered the Kyber crystals that channel the Force to power their traditional weapon, the lightsaber.

A Jedi (should) never reveal emotion

The code also dictates that Jedi Knights and Jedi Masters must not take on more than one Padawan at a given time, and forbids Jedi from forming attachments, such as marriage, family, and romantic love. Because all life is precious to the Jedi, they’re also banned from killing unarmed opponents, and they’re not allowed to seek revenge. Easy way to remember it? The Sith get to do all the fun stuff.

How the dark side came to be

Every Jedi makes their own lightsaber

We learn in Star Wars: The Clone Wars that Jedi warriors go through a ritual known as “the gathering”, which requires Jedi younglings to find a Kyber crystal most attuned to their Force presence. They then construct a lightsaber using their crystal, before being chosen as a Padawan learner by a Jedi master.

The first A New Hope treatment was originally titled “The Journal of the Whills” – this term has been folded into canon, with “the Journal of the Whills” appearing in the novelisation of The Force Awakens (in Rogue One, Chirrut Îmwe and Baze Malbus, protectors of the Temple of the Kyber, are described as guardians of the Whills). The journal is a mysterious diary that mentions the Jedi, in a verse labeled “7:477” that’s about the dark and light side of the Force.

It runs as follows: “First comes the day, then comes the night. After the darkness shines through the light. The difference, they say, is only made right by the resolving of grey through refined Jedi sight.” Because the journal is part of modern canon, fans expect it to be explored in The Last Jedi.

Grey Jedi exist, and Luke Skywalker could become one in The Last Jedi

The term 'gray Jedi' has two meanings. It’s used by Jedi and Sith to describe Force users who are able to balance the light and dark sides of the Force without surrendering to the dark side. It also describes Jedi who operated outside the strictures of the Jedi Code.

To be considered a true gray Jedi you’d need to meet both qualifications. Star Wars: Knights of the Old Republic’s Jolee Bindo is one of the earliest examples of a canonical gray Jedi, and many fans believe that Luke Skywalker will be confirmed as a Grey Jedi in Star Wars: The Last Jedi.