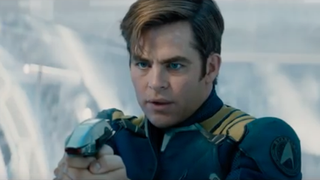 When JJ Abrams rebooted the Star Trek movie universe in 2009, he created an alternate timeline, allowing the events of previous films to still exist and for Leonard Nimoy's Spock to interact with his younger self. This led to the question of whether we'd ever see Chris Pine's Captain James T. Kirk encounter an older version of himself. You know - the one played by William Shatner.

"At this point there’s been so much built up about this potential portentous meeting between the two Kirks," Pine says in an interview in the latest issue of SFX. He's not wrong.

Before cameras started rolling on the third chapter, Star Trek Beyond, word began circulating about an early script draft that included Shatner's Kirk. This was part of original director Roberto Orci's plan, but once he left and Justin Lin stepped in to direct things changed. Co-writer Simon Pegg came aboard to rewrite the screenplay with Doug Jung, and the idea of bringing the two versions together was axed.

If that draft had made it to production, Pine believes having two Kirks onscreen would override discussion about the actual movie itself. "It would just become about that," he adds. "The movie can’t become about that. The movie has to be about whatever story we’re trying to tell. It’d be fun, it’d be kitschy, it’d be a great piece for you guys to talk about, and for late-night TV, but above and beyond that I don’t know what it serves for our storytelling purposes, you know?"

Read the full interview, plus loads more Star Trek news and features, in the new issue of SFX out June 22, 2016 or subscribe to future issues here.