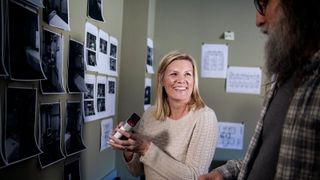 Microsoft has revealed a brand new Kinect camera, but you can stop dusting off your copy of Kinect Star Wars. This new, smaller version has been designed for serious business, not Rancor Rampage. Of course there's always a chance that some of the technology could end up being compatible with that mystery machine of rumor and speculation, the new Xbox Project Scarlett.

"Azure Kinect DK is a developer kit and PC peripheral with advanced artificial intelligence (AI) sensors for sophisticated computer vision and speech models," says Microsoft. "It combines a best-in-class depth sensor and spatial microphone array with a video camera and orientation sensor - all in one small device with multiple modes, options, and SDKs."

Microsoft officially ends manufacturing for the Xbox One sensor

Just shy of seven years after the first Kinect was sold, manufacturing for the Xbox One Kinect Sensor officially ceased. Read all about it here.

Part of the FAQ for the product includes the query "Can I use this with Xbox?" and the brutal answer "Azure Kinect SDK is not designed for use with Xbox." Clearly, even if the camera can be used for games, that's not what Microsoft wants to draw attention to now. Instead, it lists using body tracking for the medical profession, managing inventory for retail, robotics and the arousing world of manufacturer "palletizing and depalletizing" as uses for the technology.

The kit retails for $399 and boast the same time-of-flight depth sensor in the HoloLens 2, Microsoft's fancy augmented reality headset. The device will ship in June, right around the time we're hoping to hear more about the next generation Xbox at E3.

If you need something to fill the Kinect-shaped hole in your heart, try perusing our list of the best Xbox One games.