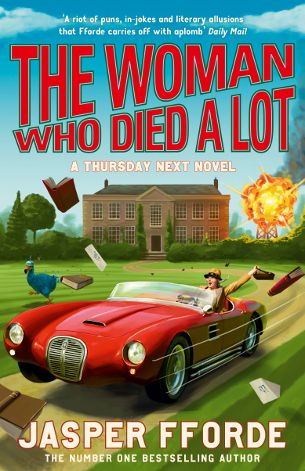 Any worries that by book six/seven (should we count The Great Samuel Pepys Fiasco?) the Thursday Next series would have settled into a rut prove groundless here, as Jasper Fforde delivers another swerve ball. The previous book was set entirely in Bookworld; this time there’s no action in Bookworld at all. Instead, Fforde seems to be setting up a whole new playground – the realm of Dark Reading Matter – for his characters to explore in future books.

Now that an accident has stopped Thursday leaping into Bookworld, she gets a job as a librarian. It’s not so dull. In Thursday’s world librarians are feared and respected. Besides, her time is preoccupied with multiple android versions of herself, a son who’s destined to become a murderer come Friday, an evil global corporation searching for rare manuscripts and a God who plans to smite Swindon. Not to mention those dido-assisted experiments to discover how gain access to the realm of Dark Reading Matter, where stories that have never been written down exist.

It’s the usual mix of fiendishly clever plotting and exquisitely executed comedy setpieces (he even makes nuns with guns seem fresh and new), though there are times when Fforde’s utilitarian prose undersells some potentially powerful moments (the smiting, especially). Some of the plots elements feel like they’re struggling for space and a couple of the final revelations fall a little flat. But even if this entry feels, more than usual, like a lot of ideas Frankensteined together, there’s plenty to enjoy in the individual parts.