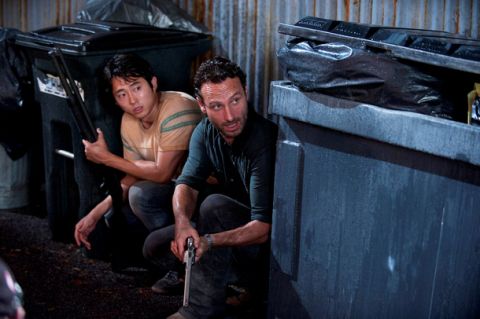 All over bar: the shooting

THE ONE WHERE Rick, Glenn and Hershel get caught up in a shoot-out, and Shane goes after Lori.

VERDICT The Walking Dead goes all-action (well, at least for the first half of the episode) and it makes a refreshing change after what has, overall, been a pretty talky, static season. It’s just a shame I spent so much time squinting to try and make out what was happening in the midst of all the gloom.

As ever, there are some great one-on-one exchanges: Daryl chewing up Carol (the character was in danger of getting cuddly); Glenn explaining to Maggie that his feelings for her caused him to let down Rick and Hershel; Shane and Lori’s discussion, where he insists that what they had was “something real”...

But for all the gunplay, emotional exchanges and impromptu attempts at amputation (!), the high point of the episode is the scary look of determination on Rick’s face at the end, after Lori whispers poison in his ear about the danger Shane represents – she does everything but press a loaded gun into his hand. The conflict between the two of them that’s been simmering away for so long is going to come to a head very soon, and I can’t wait. I can’t see the production team killing off either the lead or the most compelling character on the show, but the fireworks should be pretty spectacular.

NITPICKS We join Rick, Glenn and Hershel back at the bar at the exact same moment we left them last week. Wasn’t it daylight then? Now suddenly it’s pitch black! Also, Lori is exceptionally lucky to crawl out of that car wreck with nothing but a few cuts and bruises.

HORROR CLICHÉ OF THE WEEK Attacked by zombies, Lori drops not one but two weapons before finally finding her gun. When will people learn? Hang on to your blunt instrument/stabbing implement – you might need it again in a minute!

SPECULATION What will happen to Randall, the injured “enemy” they’ve taken in? Will Shane kill him… or is that too obvious? Now that their alliance is strengthening my money’s on Andrea doing it, maybe in a way that ensures none of the rest of the group finds out – ambushing Randall further down the road after they've patched him up and let him go, perhaps.

BEST LINE Andrea makes a bid to be Shane’s spin doctor: “It’s your presentation that leaves something to be desired.”