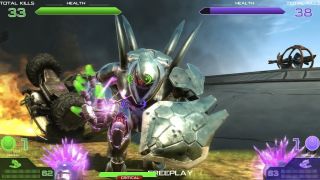 A new Halo game is on the way, but probably not in the form you expected. Say hello to Halo: Fireteam Raven, a co-op arcade experience coming this summer to Dave & Buster's restaurants:

Taking place during the same timeframe as the original Halo: Combat Evolved, Halo: Fireteam Raven puts you in the boots of an ODST (Orbital Drop Shock Trooper) soldier instead of the nigh-invincible Master Chief. So while you'll be treading somewhat familiar ground, you'll also be seeing things from a new perspective, undertaking new challenges, and fighting foes you didn't encounter back in 2001.

The game was developed by Raw Thrills and Play Mechanix, the duo behind other arcade experiences like Terminator Salvation, Aliens Armageddon, and the Big Buck hunting games. Up to four players can join up to take on the Covenant, using turret-mounted lightguns aimed at a 130-inch, 4K resolution screen. If you've got a Halo Waypoint account (and if you've played Halo games at any point within the past decade, you probably do), you can scan a QR code to add Fireteam Raven to your profile, making it easy to compete with friends or just boast about your high score.

No Dave & Buster's near you? Raw Thrills confirmed on Twitter that the game is only debuting at the arcade / restaurant chain, and is not exclusive to it. So if you've got a place that's still serving up coin-operated fun, maybe let the owners know you're interested.

As for Halo 6? Well, we've got it listed as a "wildcard" in our round-up of Xbox E3 2018 rumors, but it could still end up on our list of E3 2018 games. Still, you may just have to be happy blasting aliens from the comfort(?) of a restaurant for awhile.