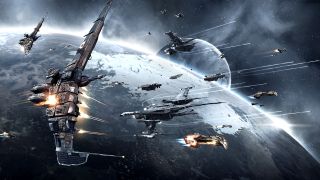 Long story short: that million-dollar war...wasn't a million-dollar war. It was actually a $10,000 hiccup (someone on Imgur actually did the maths). For those of you who want tales of massive explosions and daring exploits by maverick pilots, you're going to want to look somewhere else. Despite a record 6,000 players fighting in the same star system, the Keepstar (a large Citadel) being attacked by The Imperium survived the onslaught and there was only about $10,000 of damage. Largely thanks to server issues.

Because EVE Online players share a single universe, when a huge amount of them occupy the same space TiDi (Time Dilation) is kicked into effect. Basically, time has to be slowed down to cope with the massive amount of people all trying to execute their own commands simultaneously. One Redditor by the name of avree broke down what this meant for what was hyped as the most expensive battle in EVE Online history. But although time was slowed down for the attackers, the Keepstar repaired itself in real time.

As avree puts it, "The Imperium had to play perfectly for almost 7 hours in real-time, without screwing up for just 15 minutes. In terms of in-game time, they only needed to mess up for 40 seconds total in order to lose the fight". Which seems kind of harsh. So although the Imperium had a plan of attack they were itching to put into action, they simply couldn't do enough damage fast enough to make a dent in the Keepstar.

The below video created by Redditor Jackaryas shows exactly what happened, for those of you who are burning with curiosity.

PC strategy title Eve Online is a sprawling, sophisticated MMO with a dynamic economy, living communities, and a political backdrop that could fill up a library’s worth of history books, but in the next 24 hours it stands to become the backdrop to a one million dollar battle, involving thousands of players and an even larger audience.

The basic gist of EVE Online is this; players control ships, weapons, and resources (both material and human) in an ever evolving tug of war for control of a persistent galaxy first created by CCP Games 15 years ago. This has established a fertile ground for feuds, stalemates, and large scale wars, one of which made the news in 2013 for costing a total of $300,000 in terms of player expenditure.

But how does that amount of money make it into a game like Eve Online? Well, players are able to purchase subscription time with cash, and sell that resource in-game for EVE Online’s own virtual currency, thus establishing a conversion rate that allows players to quantify the real world value of ships, items, and other resources found in the game.

So, when players make investments in Eve Online, either with in-game currency or by spending money on microtransactions, the expenditure can be valued in real terms, and today’s potential conflict involves ships, fleets, armies, and resources worth a total of 1 million in US dollars.

Which leads us to now. Over the next few hours, it’s possible that a war will break out in Eve Online which could cost up to $1,000,000 in real world cash. If you want to know all the painstaking details behind it all, Redditor CSMprogodlegend has a great, lengthy write up on the background to the war, but the core information that you ought to know is as follows.

Remember that aforementioned $300,000 battle from 2013? The winners of that fight were a group called the CFC (it stands for something, but I’m not repeating it here), led by a player known as The Mittani. Over the course of the next few years, the CFC quickly became the hegemonic force of Eve Online, controlling vast amounts of territory and a huge army that no other faction could viably challenge.

They were kind of like the game’s own Roman Empire, but as The Mittani made a series of increasingly dubious business decisions on behalf of the CFC (now renamed The Imperium), those outside of its remit were becoming ever more persuaded by the prospects of resistance.

Enter the Money Badger Coaltion (MBC), an opposing force financed by a guy called Lenny, who made his money by running a casino website that allowed users to spend Eve Online currency to gamble. Over a series of battles and fights, Lenny’s bottomless pockets of money allowed the MBC to quickly overcome the CFC and put them on the backfoot, taking most of their territory in the process.

Lenny has since been banned from the game, but 2017 has seen both the MBC and CFC in a heated arms race, both trying to consolidate as much power as possible in preparation for the inevitable next engagement with each other. This cold war has been getting increasingly hotter, though, as skirmishes between the two sides has proliferated in recent months, setting the stage for a full blown war that could kick off later today.

To be clear, no one wants to see $1,000,000 go down the drain in a single battle, so it remains unlikely that the fight will actually take place today. But tension run hot between the two sides, and The Mittani swore vengeance on the MBC ever since they overthrew his reign on the galaxy. While a continued stalemate remains just as plausible, then, the fog of war is an unpredictable bedfellow, and any small action from either party could be the catalyst which kicks off the spiral into Eve Online’s largest conflict yet.

If you want to keep up to date with how the war pans out (that is, if you’re planning to be part of the war), I’d advise to keep checking back in to the EVE Online Reddit page as well as streams of the game on Twitch. The fight will supposedly begin at 12PM (PST)/3PM (EST) today, but don’t expect the shooting to begin like clockwork. Should the threat of the war deliver on its promise, we’ll let you know how it all played out once everything’s come to pass, but the favourable conditions lie with MBC, given their territorial dominance.

Will you be keeping a close eye on the conflict? Who do you think stands a better chance of emerging on top? Let us know in the comments below, and keep your eyes peeled later today for more updates as they arrive.