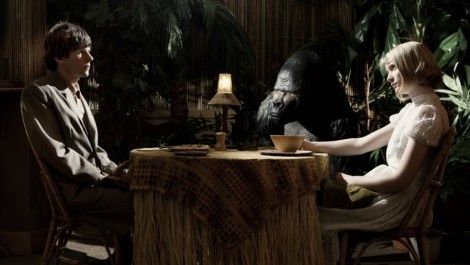 Based on a Dostoyevsky novella about fractured identity. Set in a retro-futurist noirscape on an exceedingly slim budget, nodding to Kafka, Orwell and Poe. Plus Roman Polanski’s The Tenant . And Terry Gilliam’s Brazil . Writer/director Richard Ayoade’s follow-up to the glorious Submarine could hardly be a more ambitious undertaking.

Jesse Eisenberg plays put-upon data-processing clerk Simon, who moons over his neighbour/colleague Hannah (Mia Wasikowska) from his miserable room/office. After a man commits suicide in Hannah’s building, Simon takes the opportunity to get to know her better… just as his arrogant doppelganger James (also Eisenberg) appears and starts Twilight Zoning his life, stealing all the glory at work and sweeping Hannah off her feet.

As the synopsis suggests, The Double is less about plot than mood, which cycles from arctic loneliness to spiteful slapstick via stoned existentialism and back again (we told you it was ambitious). If it’s not the film Submarine ’s profundity-starved teenage protagonist would actually make, it’s certainly one he’d love: funny, strange and beautifully put together.

As Simon’s grip on reality starts slipping, out-of-place SFX rumble like passing subway trains, repeated details become swollen with OCD significance, and famous faces (including Chris’s Morris and O’Dowd, as well as Craig Roberts, Sally Hawkins and most of the cast of Submarine ) make discombobulating cameos. Pick of the bunch is Paddy Considine, glimpsed in passing as a Buck Rogers-style TV space ranger (hopefully more footage will surface on DVD).

But there’s also something missing; that little spark of heat or heart that turns an impressive work into an excellent one. It’s as if Simon’s complaint that he feels “permanently outside myself” has taken over the whole film. Perhaps that’s the intention, but by refusing to invite viewers in, The Double must, like Hannah, be content to be admired from a distance.

Ayoade’s difficult second film shows the directorial skill – and daring – of a major player, even if it can’t quite escape being swallowed by its influences.