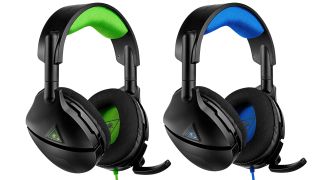 Turtle Beach is a household name in gaming headsets, with years of experience that have produced a modern, comprehensive range of products. Its Elite, Recon, and Atlas lines run the gamut of prices and features, with compatibility options for PC, consoles (yes, including Nintendo Switch), and mobile devices to boot. What's the difference between picking up a pair of Turtle Beach cans versus any other headset? The biggest difference is simple: they're built from the ground up for playing games.

That design mindset manifests in everything from mic design to the way the speakers are tuned to the level of comfort you can expect. After all, if you're going to have something on your head for hours on end as you play games and chat with friends about playing games, it had better feel good. Thankfully, Turtle Beach's product line is pretty cozy on your cranium across the board. If you don't mind dropping big bucks you can get a pretty spectacular sound experience, but even the entry-level headsets will feel and sound great. They're easily some of the best PC headsets for gaming.

A premium headset with premium sound

The Turtle Beach Elite Pro 2 was developed in collaboration with top esports teams and delivers great clarity for competitive gaming. The generously-sized cooling gel-infused memory foam ear cups keep out external noise, while the TruSpeak mic has optional mic monitoring and is remarkably clear. The SuperAmp packed in with the headset is where the fun is at. It hooks up via Bluetooth to the Turtle Beach Audio Hub app on your mobile device, letting you switch between sound profiles, tweak your game/ chat mix, and you can even take phone calls via the Bluetooth connection to your phone. It's an expensive gaming headset, but it'll give you the edge in any online scenario, and that is something you can't put a price on.

Check out our review for more information on the Turtle Beach Elite Pro 2.

High-end in everything but price

The Turtle Beach Elite Atlas is priced like a mid-range headset at £90/ $100, but it punches above its price point in almost every way that matters. The overall build quality of the product is surprisingly sturdy, and the reserved black-and-chrome look won't attract nearly as many incredulous looks as some of the more vibrant plastic and LED-infused options you can find. The Elite Atlas' removable mic even means that you could probably take it out into public without getting singled out as a power player.

All that said, this is still very much a gamer's headset; its levels are tuned for luxuriating in explosions and picking up nearby footsteps rather than enjoying the subtleties of a philharmonic orchestra or what have you. With its lack of built-in surround sound and no amp or tuning support, the Turtle Beach Elite Atlas has no pretensions: it's simply a great gaming headset at an excellent price.

A budget headset for battle royale

The Recon 200 will barely make a dent in your bank balance, at £50/ $60, but offers surprisingly good sound quality at that price. Announced alongside the Stealth 300, the pair of headsets have been optimised for Fortnite on Nintendo Switch, as well as other battle royale games.

Both headsets feature amps, which means they need to be charged. The Recon 200's battery life is only 12 hours, supports Windows Sonic, and has always-on Bass Boost. It's a decent headset for those on a budget who don't want to compromise on sound.

Robust sound at a great price

The Stealth 300 isn't quite at the cheapest tier in Turtle Beach's headset range, but for £80/ $80 you can get a comfortable pair of headphones with four audio presets that cycle through default, Bass Boost, Bass and Treble Boost, and Treble/ Vocal Boost options.

The headset's amps need to be charged in order for the headset to work, which can be a pain if you've forgotten to juice them up, but on the plus side, the battery life is quite extensive, giving you around 40 hours from a single charge. They're super comfy and you'll have no problem wearing them for hours, and the ProSpecs tech means that even glasses wearers won't suffer from their eyewear being slowly fused to their skull. If you want balanced sound on a budget, the Stealth 300 is our go-to.

Check out our review for more information on the Turtle Beach Stealth 300.

The Turtle Beach Elite 800 and 800X both feature active noise cancellation and 7.1 DTS surround sound and you'd hope so for $250, and its Bluetooth 4.0 connectivity lets you pair it with two devices simultaneously. There's no boom arm to be seen, but the built-in twin mics makes for great voice clarity.

The headset comes with a magnetic charging stand which acts as a base station for the wireless headset, and the matte black of the headset is offset nicely with the glossy black finish of the base. When it comes to sound, the Elite 800 has a range of modes tuned to different genres, as well as a Superhuman Hearing setting to give you an edge competitively. It's a pricey piece of kit, but if you have the money, it's worth every penny.

The Stealth 700 comes in at $150, or around £100 on Amazon, and is touted as a premium wireless headset, and a more affordable option than the Elite 800. With Bluetooth, surround sound, and active noise-cancellation, it's certainly a more feasible option if your purse strings are a little tight.

From a performance perspective, the Stealth 700 can get a little too bass heavy when you take the volume up to the max, but unless you're hard of hearing or enjoy the risk of blowing your eardrums out, this won't be an issue for most people. The 10 hour battery life isn't ideal, but as long as you remember to charge it between sessions, you should be just fine. The headset also benefits from Turtle Beach's Superhuman Hearing sound mode. If you really can't stretch for the Elite 800, the Stealth 700 is an attractive alternative.