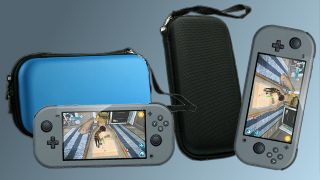 E3 2019 might be over, but the leaks keep coming. The latest is pretty exciting, with a manufacturer of gaming accessories seemingly letting the cat out of the carrying case on a new Nintendo Switch Mini. Check out wholesale retail site Alibaba and you'll find plenty of images of a new, all grey Nintendo Switch Mini.

The leak first came to the attention of gamers when an alleged spokesperson for an accessories company, Honson Gaming, reached out to content creator and Nintendo fan Alexander Blake.

Was the Switch Mini just unofficially announced to me? A gaming company in China just wrote to me letting me know they’re releasing accessories for the Nintendo Switch Mini. Would a company make products for a console they didn’t KNOW existed, and didn’t have in hand? pic.twitter.com/yQgk7xCbUnJune 18, 2019

A search for Honson gaming on Alibaba brings up entries with names like "Honson New Arrival black color carry bag for Nintendo Switch Mini case" and even images.

Yes, these images of the device could be photoshopped placeholders, but if nothing else they add weight to rumors that a mini Switch is coming. Accessory makers have often been the source of leaks about the dimensions and release of new products - including various iPhone versions - because they get the information ahead of release.

Rumors of a new Switch have been surfacing since March with reports that we'll get two versions. A Bloomberg report in April said we could expect a "new, cheaper version of the Switch" in June - *looks at watch* - so we're going to keep hoping that a new Animal Crossing: New Horizons machine is on the way.

Find out more about the biggest new games of 2019 on the way this year, or watch our Release Radar video below to discover what's going on in games and entertainment this week.