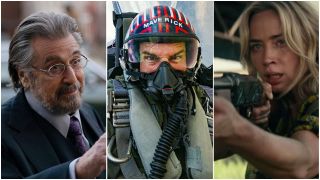 The big game's over. The 49ers lost to the Chiefs – and official Super Bowl trailer season is over. There's no chance of any surprise Eternals footage. Instead, we got an abundance of new trailers, showing off some of this year's most exciting releases.

Our Super Bowl 2020 trailers hub includes every new trailer that debuted through the game, all collected in one place. So, what are you waiting for, get watching! Side note: studios pay $5.6 million to show a 30-second trailer... That's a whole lotta dollar.

We were expecting footage from Marvel's upcoming Disney Plus series Falcon and The Winter Soldier, but not also from WandaVision and Loki. Yet, that's exactly what we got, as a trailer teased all three shows. Kevin Feige, you’ve done it again.

No Time To Die

"Have you ever flown one of these before?" asks Bond. "Nope," replies the new 007. The new Bond movie, No Time to Die, looks incredible – and the Super Bowl trailer, though only 30 seconds long, is phenomenal.

Meet Nat's first family. No, not the Avengers: Yelena, Red Guardian, and Rachel Weisz' unnamed Black Widow. Plenty of adrenaline-pumping action, plus Weisz in costume for the first time.

We feel the need... The need to watch this trailer over and over again! Just minutes before the teaser debuted at the Super Bowl, Tom Cruise shared the 30-second trailer for Top Gun Maverick on Twitter.

Minions 2: The Rise of Gru

The Minions are back, and as cute/annoying as ever. This one's only the teaser trailer, though, for the main trailer which will arrive on Wednesday.

A new trailer for Disney's latest live-action reboot, Mulan, debuted during the game, giving us a closer look at the forthcoming epic.

The Fast and Furious 9 trailer debuted at a concert in Miami – and the first footage from F9 did not disappoint. Do you want family revelations? You've got it! Justice for Han?! It's here!

A Groundhog Day sequel... of sorts

We have a new look at the sequel to the surprise runaway hit A Quiet Place – and this one confirms that John Krasinski will be back for the sequel thanks to some flashbacks.

Nope, the Sonic the Hedgehog movie is not a dream, but a real film heading to cinemas within the next two weeks. Michael Thomas, Christian McCaffrey, and Allyson Felix all lend a hand in this tailor-made trailer, which sees the athletes telling us what they've learnt from the Blue Blur.

With no Rick and Morty season 4 return date in sight, we’ll have to make do with this wonderfully-meta Super Bowl ad. This 30-second teaser features the Sanchez family trapped inside, you guessed it, a Pringles ad.

The SpongeBob Movie: Sponge on the Run

SpongeBob movies have never shied away from a live-action star or two. David Hasselhoff famously appeared in the yellow sponge’s first big-screen adventure, and this instalment will include Keanu Reeves (in a bush, naturally), and Snoop Dogg. Because of course.