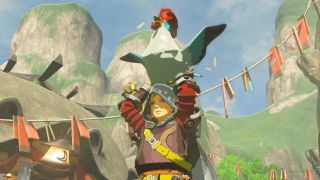 With a single Cucco and a remote detonated bomb, one Twitter user did massive damage to The Legend of Zelda: Breath of the Wild's desert boss Molduga. A short video shows how his method of madness in Nintendo's open world Zelda adventure actually works.

In the video, Link holds on to a Cucco as he traces Molduga's pathway underneath the sand. As soon as the creature passes by he throws the Cucco and a bomb onto the sand, detonating the explosive right as the monster comes up for air. The Molduga takes the bait and a swarm of Cuccos, set off by the explosion, all rein down on it doing a big chunk of damage.

It's another example of the extensive amount of options Breath of the Wild gives you to just mess around—it only makes sense that some of that tomfoolery would lead to usable gameplay strategies.

The video of Twitter user ｍ山Ｅヨ using the Cuccos gained massive traction on Twitter and Reddit, netting over one million views and a lot of laughs. Outside being one of the funnier clips taken from Breath of the Wild, the achievement is quite impressive. There aren't any Cuccos on that side of the map, so you'd have to travel as far away as Kakariko Village and take them all the way to the bottom corner of the map to make this work.

It's another amazing example of Breath of the Wild's physics engine and world design at play—more than two years after the games initial release. I'm sure many Nintendo fans remember Link soaring through the sky in a magnetic, flying minecart or  two of the games mini bosses clashing after chasing the tunic wearing hero. I wonder what we'll see years from now, especially with the crazy things that modders have been creating in the most expansive version of Hyrule ever made.