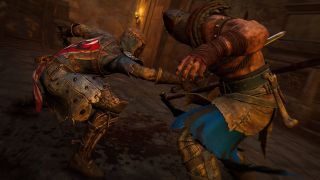 When single-player content is included in a multiplayer-focused game like For Honor, prospective players' first fear is that it's all going to feel like a gussied-up tutorial. Ubisoft's own Rainbow Six Siege somewhat plays into this assumption: where there could be a story mode recounting the backstories of each distinguished Operator, there's instead the spartan Situations Mode consisting of simple training simulations against the AI. But For Honor's story campaign clearly isn't half-baked. With a fully voiced cast, multiple playable perspectives in the Knights vs. Vikings vs. Samurai conflict, and bursts of gameplay that stray from the established combat mechanics of multiplayer, For Honor's single-player won't just be some option on the main menu that you never bother to boot up. Besides priming you for player-vs-player bouts, as you would expect, the campaign weaves an intriguing tale of ancient, psychological warfare featuring multiple protagonists, and sets the stage of For Honor's entire multiplayer ecosystem.

With its February 14th, 2017 release date fast approaching, anyone interested in For Honor should be familiar with its duel-focused combat, where opponents lock on to one another and clash weapons with telegraphed directional attacks. From what we saw at this year's E3, we already knew that those same core mechanics lent themselves nicely to missions where you're a one-warrior army, slicing your way through swathes of units and occasionally squaring off against tougher, smarter generals. But the two single-player stages I recently played - which take place somewhere between the missions from the E3 demo - highlighted some of the quieter moments from this melee-centric war. As in, the quiet of an adept assassin as she sneaks up on her mark and silently slits their throat before a proper fight can break out. But between all the brutal neck stabbings, there were also welcome bits of optional lore, as our anti-hero surveys the state of the world around her.

For my first mission, I'm playing as Mercy, a named soldier of the Peacekeeper class from the Knights faction, who dual-wields blades and prioritizes agile aggression to make up for her fragile defense. Mercy is a mercenary under Apollyon's command, the scheming villain who seems to have orchestrated this entire history-warping conflict (as evidenced by her voiceover of the gorgeous CG intro cinematic). And in between bits of skulking around a Viking encampment, executing unaware guards or slicing up anyone who takes notice of you, Mercy can also muse about the Vikings' lifestyle and strategies if you interact with points of interest peppered throughout the surprisingly large levels. The mere fact that Mercy has her own name, cunning personality, and well-acted voice to match is incredibly encouraging, because this already puts For Honor's story far beyond the mostly mute protagonists of other secondary single-player campaigns found in multiplayer games.

To further enable your enjoyment of the play-at-your-own-pace story missions, you can also seek out hidden emblems tucked inside destructible objects that dot the environment. It's unclear if collecting them all provides tangible benefits or simple satisfaction, but it's nice to see another element besides the nuggets of lore that caters to completionists. Again, both deviations are entirely optional, and I missed quite a few on my way to sabotage a primitive elevator that was crucial to the Vikings' outpost. It's too early to say if Mercy was ruthlessly slaughtering enemy soldiers or just a pawn in Apollyon's game, but meeting back up with Apollyon's Blackstone Legions crew after completing my mission has me intrigued to find out.

The next mission shifted to the Vikings' chapter of the campaign (which starts with the Knights, progresses to the Vikings, and concludes with the Samurai). A year has passed since my successful sabotage as Mercy, but now I'm in control of a hardened Raider, fighting to unite the Viking forces who turned against each other as morale started to crumble. Most of the classes give you a choice of playing as a male or female warrior, and interestingly, that extends to the campaign (though some roles, like the Peacekeeper and Shugoki, are gender-locked). It's a simple matter of preference, because both versions of the character are equally brutal, and shout the same dialogue, just with different voice actors. Contrary to the stealthiness of Mercy's mission, the Raider's introduction is an all-out attack, as you fight to take back food supplies that are being hoarded by a tyrant in your ranks.

Said tyrant was actually the end boss of this mission, and a damnably difficult enemy, with an enormous health bar and the ability to stun you with a headbutt and blur your vision. And just when you think you've landed the killing blow, the coward flees for his life, prompting a chase on horseback that feels like a simple-yet-exciting Uncharted action sequence by way of Deadliest Warrior. It's nice to see varying power levels amongst your adversaries in the single-player; some grunts will fall after a few strikes, while others have advanced AI and will try their best to flank and overwhelm you. Though you won't play as each and every class from the 12 total options in For Honor, you're guaranteed to have at least faced them all by the end of the campaign, giving you a familiarity that'll be a huge boon on the multiplayer battlefield.

That's also the planned progression of For Honor as a whole: the single-player content recounts the past events that led up to the present conflict, then you forge a future for your chosen side in multiplayer. After you've completed the campaign, the story continues (in a sense) via the Faction War, a persistent, cross-platform struggle that gives context to each match. As in games like Mortal Kombat X, every online victory acts a small contribution to a much larger group effort. It plays like a drawn-out game of Risk, with each season lasting 10 weeks, and actually affects the aesthetics of each map: depending on which faction controls the territory you're fighting in, the foliage, banners, and overall climate of the area will change. Those who fought valiantly for their faction can show off their dedication through ornaments given as rewards at the end of each season - then the battle continues anew after a short pre-season interlude.

The fact that For Honor's single-player and multiplayer interlock as one complete narrative is a clear sign that this campaign isn't just some tacked-on mode, added last-minute to trick consumers into a sense of buying a complete package. For Honor's story puts forth characters and scenarios that are more interesting than they need to be; it might not be an epic on the same level as a BioWare game, but it's wonderful to see such effort go towards making your single-player exploits feel like a meaningful prelude to the multiplayer. When For Honor hits PS4, Xbox One, and PC in February of next year, you'll only be depriving yourself if you scoff at the single-player and focus solely on multiplayer.